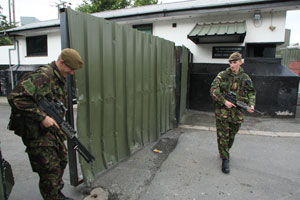 Sinn Féin has welcomed the departure of the last British soldiers from South Armagh.
Sinn Féin Newry/ Armagh MP Conor Mr Murphy received confirmation from the British last weekend that helicopter flights by the British military in South Armagh had ceased and that the last remaining members of their army would leave the area on Monday.
“This is obviously welcome news for the community in South Armagh who have had to live under British military occupation for the past 30 years. Sinn Féin made the issue of demilitarising communities like South Armagh a central part of the political negotiations. We are happy we have now arrived at this point”, said Murphy.
“It is now vital that the British government ensure that all lands stolen from local people and occupied are returned and that this community is allowed to move on without the blight of military occupation”, he said.