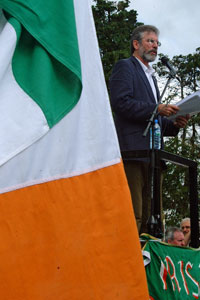 Over a thousand republicans from all parts of Ireland and abroad gathered in the County Kildare Village of Sallins last Sunday for the annual Wolfe Tone Commemoration.
A colour party from the Roddy McCorley Society in Belfast led the parade, involving various marching bands and numerous colourful banners representing Sinn Féin cumainn throughout the country, to the commemoration ceremonies at Bodenstown Churchyard, the final resting place of the father of Irish republicanism, Theobald Wole Tone.
Proceedings in Bodenstown were chaired by Sinn Féin Dublin Mid West representative, Joanne Spain following an introduction by Francie Molloy MLA of the National Commemoration Committee.
Following playing of the Last Post, a wreath was laid by Belfast republican and wife of the late Joe Cahill, Annie Cahill.
Chairperson of the National commemoration Committee, Francie Molloy introduced the chairperson
Joanne Spain said that the gathering was taking place at a “a mixed time” for republicans, with great success for Sinn Féin at the Assembly elections in the Six Counties, an unprecedented decision on the issue of policing and Martin McGuinness elected as deputy First Minister in the North, but that in recent weeks Sinn Féin had not done aswell as the party had expected in the 26 County elections.
The main address was delivered by Sinn Féin President Gerry Adams.

Below we carry an edited version of his address:

‘We have entered a new phase of our struggle’ — Adams