Collusion The cover up continues 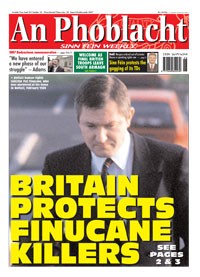 The British government has closed ranks to protect the killers of Belfast human rights solicitor Pat Finucane. Finucane was murdered at his home in Belfast in February 1989.
Last year Ken Barrett, a unionist paramilitary convicted of killing Finucane, was freed after serving three years in jail. But the Finucane family has always insisted Barrett and the Ulster Defence Association (UDA) did not act alone.
The latest chapter in the British cover up of the Finucane killing unfolded on Monday 25 June when it was revealed that the so-called Public Prosecutions Service (PPS) is refusing to prosecute any member of the British crown forces involved in the murder and that of Adam Lambert. Lambert, a Protestant man, was mistaken for a Catholic and shot dead by members of the UDA gang who assassinated Finucane.
Nor will the British state be taking any action against its agents who supplied weapons to the UDA gang who carried out the 1992 attack on Sean Graham’s bookmakers on the Lower Ormeau Road in South Belfast which left five nationalists dead.

Special Branch agent
In its 25 June statement the PPS, confirmed for the first time, that UDA quartermaster and Special Branch agent Billy Stobie – who supplied the weapons to Finucane’s killers – handed over weapons to the Special Branch and that weeks later these weapons were returned to the UDA.
The PPS maintained that as none of the RUC officers who handed these guns back to the UDA could be identified no one would be prosecuted.
One of the weapons, a handgun, was used to kill Catholic Aidan Wallace as he played pool with his brother in the Devenish Arms on December 22 1991.
Within weeks of that attack on February 1992, a UDA death squad using that same weapon and an AK 47 assault rifle, mowed down 5 Catholics, Jack Duffin (66), William McManus (54), Christy Doherty (51), Peter Magee (18) and James Kennedy (15) in the Sean Graham’s bookmakers shop on the Lower Ormeau Road.

Collusion confirmed
The PPS announcement made on Monday 25 June effectively buries the investigations into the Finucane killing carried out by one of Britain’s most senior police officers, John – now Lord – Stevens.
Stevens finished his investigations into the killings of Finucane and Adam Lambert four years ago he confirmed that he had uncovered evidence of collusion into both killings.
The high profile investigator said: “I have uncovered enough evidence to lead me to believe that the murders of Pat Finucane and Brian Adam Lambert could have been prevented. I also believe that the RUC investigation of Pat Finucane’s murder should have resulted in the early arrest and detection of his killers. I conclude there was collusion in both murders and the circumstances surrounding them”.
He concluded that the, “actions or omissions”, of crown force members had led to the deaths of innocent civilians. He also accused members of the RUC and the British army’s FRU of, “wilfully”, obstructing and misleading his inquiries by withholding evidence and intelligence.

Brian Nelson
The Stevens inquiries into the circumstances surrounding the killing of Pat Finucane lasted almost 18 years and centred on the activities of UDA intelligence officer Brian Nelson – a British agent attached to British Military Intelligence through the Force Research Unit (FRU).
Nelson was a British soldier and had served in the Black Watch Regiment but in the early 1970s he was imprisoned after being found guilty of carrying out a UDA punishment beating.
Questions abound as to whether Nelson ever left the British army but he was recruited into the FRU by a Colonel Gordon Kerr and was installed as the UDA’s top intelligence officer.
In that role Nelson was in a position to direct UDA deaths squads and using information supplied to him by his FRU directors targeted republicans.
However, at least 29 people, many of them uninvolved Catholics, were killed by the UDA at the time of Nelson’s involvement and were identified through crown forces intelligence files.

Ruling “scandalous”
Reacting to the PPS ruling Sinn Féin’s Alex Maskey, described it as, “scandalous”.
Maskey was repeatedly targeted for death by the crown forces and Brian Nelson. In the mid 1980s Maskey was shot and seriously injured at his Andersonstown home while in May 1993 Sinn Féin activist Alan Lundy was shot dead by a UDA gang as he worked in Maskey’s home.
“There was a sustained and orchestrated campaign against my life which included the murder of my best friend Alan Lundy as he worked in my home in 1993.
“I find it absolutely galling that the PPS has taken this decision. It wouldn’t happen in any other country in the world”, he said.
Echoing Maskey’s anger the family of Pat Finucane said in a statement that they were extremely angry and disappointed at the decision of the PPS.
“It is difficult to square the unequivocal nature of the conclusions reached by Lord Stevens four years ago with the submissive, timid, unconvincing reasons advanced by the PPS for not instituting a single prosecution.
“It is notable that the PPS feels himself unable to use ‘certain intelligence records as evidence’ a clear indication that the interests of [British] national security remain more important than human lives”.
The Finucane family statement went on to say that they would not be deterred by the decision made by the PPS and that they would continue to press for a fully independent inquiry into Pat’s killing and all the circumstances surrounding it.
“Only an independent public inquiry can satisfy the concerns of our family and the wider public about the existence of collusion between the British army, the RUC and the security services in the murder of Pat Finucane and many others”.