Letter to the Taoiseach 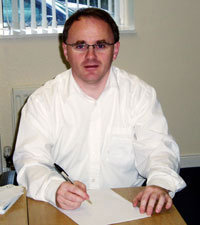 David McNarry walked out on me last Thursday.  David is a former Head of the Orange Order and he is the Chief Whip of the Ulster Unionist Party at the Assembly.
I was chairing the Assembly’s Statutory Committee for Culture, Arts and Leisure in Room 152. We were discussing possible topics for Committee Inquiry. As you know yourself, Taoiseach, from your experience of Joint Oireachtas Committees, the business of an Inquiry involves taking evidence from relevant bodies and arriving at recommendations for government action.  An Inquiry can take months to complete.
I forgot to tell you that David is Committee Vice Chair or ‘Leas Chathaoirleach’ as they tend to say in Stormont these days. Anyway, David tabled a specific proposal that our Committee “set up an inquiry to investigate the merit of the Government introducing an Irish Language Bill, and to further decide if an Irish Language Act brings benefits to Northern Ireland”.
Francie Brolly (just like his son Joe) and Paul Maskey were quick to the breaking ball. They moved to propose an alternative Inquiry topic about the under-funding of Culture and Arts more generally. They did this for the right reasons and for no ulterior motive. In fairness to Dominic Bradley and Pat Ramsey of the SDLP, they were having none of it either. They knew David McNarry’s stalling tactic when they saw it.
Everyone knows that the British Government’s decision to organise a second consultation exercise about the Irish Language Act was completely unnecessary when the first consultation clearly demonstrated the demand for such legislation.  In fact, Taoiseach, I should remind you of the mobilisation in Belfast this coming Saturday 9 June which is forming up at the Culturlann on the Falls Road at 1.00pm before proceeding to Writers’ Square in the city centre.
Anyway, back to Daivd McNarry whose biggest problem was that his party colleague, David Burnside MP hadn’t shown up.  He was on business in London.  For the third Thursday in succession, Burnside has been absent from these proceedings at the Assembly.  And Kieran McCarthy of the Alliance Party had also sent apologies.  So, the arithmetic did not stack up for David who is vehemently opposed to legislating for the rights of Irish language speakers in the Six Counties.
I put his proposal to a vote and David lost by five votes to four.  So, David stormed out of Room 152, leaving behind his agenda papers and his reading glasses.
He made a bee-line for the BBC’s Martina Purdy shouting “discrimination against Unionists”.  David forgot to point out that the three DUP members of the Committee remained in the room to complete the day’s business.  Nelson, Jim and Wallace accepted the outcome and now know that they’ll have to await the various stages of legislative passage before getting their chance to dilute the rights of Irish language speakers in the North.
At least they remained in the room, unlike David.  One of this party colleagues told me in the Basement Canteen that David had eventually gone back to Room 152 for his documents and glasses and that he has exhausted his quota of Assembly walk-outs at a very early stage in the lifetime of this Assembly.  Another one would not have the desired effect.  You can walk out once too often.
Did you ever walk out of a meeting, Bertie?  I remember one of our own councillors, who is now deceased, asking why we were walking out on a particular evening.  He thought he would remain on but that the rest of the group should ‘tear on’.  You always get spirited individuals within groupings.
Reg Empey could do with more spirited individuals around him. People who walk out of meetings.  By the way, David McNarry, has formally requested to meet me because he is “most unhappy with the manner in which business was conducted at our meeting last Thursday”.  I am quaking in my shoes.
An Phoblacht
44 Parnell Sq.
Dublin 1
Ireland