General election 2007 : History made once again in Cavan-Monaghan 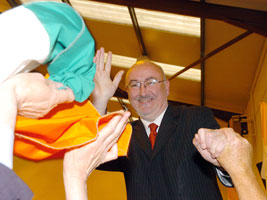 Caoimhghín Ó Caoláin celebrating after his election victory in Cavan-Monaghan

While republicans were disappointed with the overall results in the 26 County general election, they can be proud of several achievements in the election, not least of which was the historic third consecutive term won by Caoimhghín Ó Caoláin  in the border constituency of Cavan-Monaghan.
All election campaigns by their very nature begin as soon as the previous one ends but the task of re-electing Ó Caoláin as TD for Cavan-Monaghan began in earnest 12 months ago when the election directorate for the constituency first met. In the initial months, plans and local election directorates were put in place in each of the eight electoral areas that make up the constituency.
The more obvious aspects of the Sinn Féin strategy in Cavan-Monaghan came into play when the candidate began his canvass, joined by local activists in January.  The initial stages of the campaign suffered a setback when  Caoimhghín was taken to hospital in the early hours of  9 February.  He had suffered a heart attack and the concerns of republicans in his own constituency and beyond strayed from the election effort for a time.  Thankfully Caoimhghín returned to the campaign trail after a short break, certainly shorter than his doctor would have advised.  It was full steam ahead after that and Sinn Féin activists undertook the most comprehensive canvass that the constituency has ever seen.
Cavan-Monaghan was always going to provide a tough contest despite media reports that it was home to a ‘safe seat’ for Sinn Féin.  Republicans know only too well that such a thing does not exist. The fact that the Ceann Comhairle would be automatically returned, thus reducing the constituency to a four-seater and in turn significantly increasing the quota, presented a challenge that couldn’t and shouldn’t be underestimated.
The directorate estimated that the quota would be somewhere around 13,000 and advised areas that the party target would be 12,500, in order to secure the seat.  This was 1,000 votes higher than the party had ever secured in a general election in the constituency.
In a comprehensive campaign, the Sinn Féin message was articulated through a local publicity strategy alongside the intensive canvass.  The campaign involved unrivalled activity from Sinn Féin activists that didn’t cease until close of polls at 10.30pm on Thursday, 24 May.
For many activists the work continued into count day, when the Sinn Féin team assembled at the Threemilehouse count centre, outside Monaghan Town, early on Friday morning.  The tally on this occasion was carried out on an agreed basis between the main political parties in the constituency, in contrast to the tense atmosphere that has traditionally marked previous counts.
When the first tally reports began to emerge, it was clear that the news was positive.  While the high turnout meant that the quota would indeed exceed 13,000, it was felt that Sinn Féin support was holding strong.  As a more detailed picture emerged, the consensus was that Caoimhghín Ó Caoláin’s vote would top the 12,500 target set by the directorate all those months previously.
The quota, when determined, was a massive 13,158.
With minutes remaining before the formal announcement of the first count, news was relayed to party members that not only had the target of 12,500 been exceeded, but that Caoimhghín Ó Caoláin would be elected on the first count.  Four votes over the quota, but over the quota nonetheless.  Thirteen thousand, one hundred and sixty- two - the sixth highest vote of any candidate in this election anywhere in the State, and the highest secured by any Sinn Féin general election candidate in the 26 Counties in living memory.  It was another historic achievement by the Sinn Féin team in Cavan-Monaghan.  The party has reinforced its position as the largest political grouping in County Monaghan - and the growth of Sinn Féin continues in County Cavan.
An Phoblacht
44 Parnell Sq.
Dublin 1
Ireland