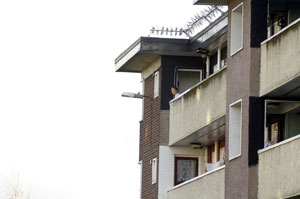 Real picture of poverty in Ireland

As a new study by the Economic and Social Research Institute pinpointed the key indicators of poverty in the 26 Counties last week, the Combat Poverty Agency (CPA) also marked 20 years of work with an exhibition of photographs covering the two decades of activism by the agency, along with a warning that cycles of disadvantage affecting over 18% of the population still persist in Irish society today.
The ESRI study titled Multiple Disadvantage and Multiple Deprivation identifies five dimensions of poverty today and found that farmers, local authority tenants, and those without educational qualifications are most at risk of poverty in terms of ill health and inadequate housing.
Those most likely to suffer from income poverty and an inability to afford basic everyday items include the unemployed, lone parents, people without a leaving cert qualification and rural local authority tenants.
Commenting on the ESRI report, Robbie Hanan, co-ordinator of the European Anti Poverty Network said that the figures were, “a poor showing for one of the wealthiest countries in the EU”. Hanan argued that eliminating poverty must be high on the agenda of the new government.
Hanan said, “We need to start to use to the money which has been earned in the boom years to try to eliminate the scandal of poverty which marks us out as having one of the poorest records across Europe in terms of our prosperity to actually deal with poverty”.
The reality of the scale of that policy failure was displayed with accuracy by the Combat Poverty photographic exhibition that traces the changing face of Ireland from the 1980s to the present day. CPA Director Helen Johnson said that though Ireland today is a “world apart” from 1986 there are new challenges to be tackled.
Johnson said that, “Not everyone can take up a job, and not very job guarantees an adequate income. Many people remain at risk of poverty, with 18.5% of the population living on less than €209 per week”.
One of Combat Poverty’s biggest concerns is that low incomes can prevent some people from getting the opportunities that others take for granted.
The CPA exhibition, which will now be on tour around Ireland, focuses on a series of issues including, “who is affected by poverty, and how communities are responding to poverty, income adequacy, the value of education in addressing poverty, financial exclusion and child poverty”