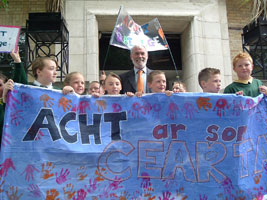 Francie Brolly with kids from Gaelscoil na Mona protesting at the BBC in Belfast on Tuesday, 5 June, over the state-run broadcaster’s lack of coverage of Irish language issues

Sinn Féin’s Assembly Irish language spokesperson Francie Brolly MLA joined other Irish language activists on Tuesday outside the BBC to protest at the lack of coverage granted to the 5000 activists who attended the  Irish Language Act march in February.
Brolly said,
“Two months ago the Irish language community reclaimed the streets of Belfast and rallied in a positive and colourful manner to demand their rights from the British Government. The media failed to record this event, which is indicative of the respect granted to Irish speakers from the politbureaus in the Six Counties.
“Although it is disappointing that the BBC et al did not cover this event, we shall be back on the streets again on 9 June (Saturday) at 1pm, assembling at Cultúrlann Mac Adaim Ó Fiaich, demanding language rights - human rights.
“I urge everyone to attend and every political party on this island to support the demand for a language act in the Six Counties. It is important that the Act must be powerful, rights-based and adequately funded. Sinn Féin demands legislation which is enjoyed by the 26 Counties and Scotland.”
An Phoblacht
44 Parnell Sq.
Dublin 1
Ireland