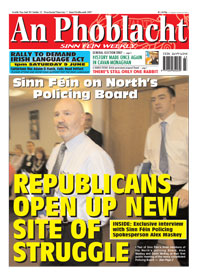 Sinn Féin members took part in their first public meeting of the North’s newly constituted Policing Board on Wednesday, 6 June. Speaking after the meeting, party spokesperson on policing issues Alex Maskey said that the party was on the Board to ensure real accountability, representativeness and impartiality.
Last week, as Sinn Féin representatives took their places on the new Policing Board, Maskey said that the move was about delivering accountable and acceptable policing and ensuring that what passed for policing in the Six Counties in the past is never repeated.
Maskey described the move as a significant step forward in the party’s effort to ensure delivery of a fully accountable and acceptable policing service. “Our membership of this Board, working with the community, will be crucially important in delivering this goal. We have set ourselves a number of objectives which we intend to deliver through our membership of the Policing Board and the local DPPs:
“Sinn Féin will not be afraid to confront head-on issues of concern to ourselves and people we represent. The days of PSNI officers coming to the Policing Board to have decisions rubber-stamped and endorsed are over. We will bring genuine accountability to this process. We want to work constructively with the PSNI in ensuring that good policing practice becomes the norm. We want the community to have confidence in the policing service which serves it.
“We are also keen to see the Policing Board itself become more relevant to the community it serves. Sinn Féin have already conducted a wide-ranging series of meetings with a variety of groups and individuals. The Policing Board now needs to undertake an open engagement with as wide a cross-section of society as possible. We need to open this Board up to victims’ groups, human rights organisations and the community sector. Only then will the Board begin to fulfil its undoubted potential.
“The Sinn Féin team taking up our places on this Board today look forward to giving a voice to a community which has for generations experienced all that is bad about failed policing. We want to be constructive in our work and we want to ensure that the failures of the past are never allowed to be repeated. We want to play our part in building a truly accountable and representative policing service to serve the entire community here for the first time.”
Speaking this Wednesday after the first public meeting of the North’s newly constituted Policing Board, Alex Maskey said:
“We set out in detail last week our objectives in joining the Policing Board. Already we have undertaken a significant amount of preparatory work and are keen to get down to the real business of holding policing to account.
“Today we tabled a number of questions for the PSNI Chief Constable to deal with, including the lack of co-operation with inquests into a series of killings in Belfast and Tyrone, the lack of movement towards an unarmed service and the continuing under-representation of Catholics in senior positions.
“While public sessions like the one today are important, particularly to allow members of the public to ask questions, much of our work will take place on the committees - and progress on that element of the Boards work was made last week,” he said.
“Sinn Fein are serious about our commitment to achieving an accountable and acceptable policing service. Today is another step along that road. We want to shape future policing structures to ensure real accountability, representativeness and impartiality. That is our job on the Policing Board.”
On Monday, Alex Maskey said that formal moving of the motion on the Report on Devolution of Policing and Justice Matters by the Chair of the Assembly and Executive Review Committee Jeffrey Donaldson in the Assembly represented an important step in the process of devolving these responsibilities.
“This is the next step in the process of the devolution of policing and justice powers”, Maskey said.
“Sinn Féin objectives have always been for legislation to enable transfer of powers away from Britain and into Ireland, for agreement on the time-frame and the detail of powers to be transferred and agreement on the model for a Justice department.
“We have already begun to address these issues and look forward to working constructively within the Assembly and Executive Review Committee to ensure progress towards the devolution of policing and justice powers in early 2008,” he said.