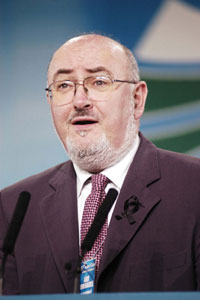 Sinn Féin has confirmed that the party’s Dáil leader, Caoimhghín Ó Caoláin TD, is “recovering well” after suffering a heart attack at his home in the early hours of Friday 9 February.

A party spokesperson said that Deputy Ó Caoláin wanted to thank all the hospital staff who had treated him and to thank well-wishers who had contacted his home and his offices in Monaghan and Leinster House.

Ó Caoláin was taken to Monaghan General Hospital on Friday and then taken to St James’s Hospital, Dublin, where he underwent surgery on Friday evening. The surgery was a complete success.

“He is looking forward to returning to work at both national and constituency level after he has taken the required time for essential rest and recuperation.

“He passes on his sincere appreciation to all the medical staff who treated him and all the many well-wishers.”