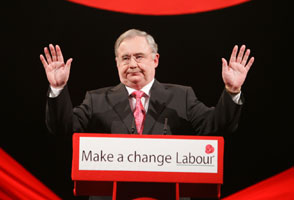 Pat Rabbitte unveils his tax-cut ploy at the Labour conference

Labour Party leader Pat Rabbitte declared last weekend, during his party’s pre-election conference, that, if he makes it into government after the next general election, he will cut the standard tax band by 2 per cent to 18 per cent.  This isn’t part of any planned wider reform of the tax system — it’s merely a last carrot dangled before an electorate unconvinced and underwhelmed by the self-proclaimed ‘caring coalition’.

Rabbitte’s announcement is bound to be met with some unease amongst Labour’s own grassroots — after all, it comes less than six months after Rabbitte declared that “the era of major tax cuts is over”.  Now, under his leadership, Labour is firmly embracing the favoured neo-liberal sport of tax cutting.

“Labour is attempting to convince us that the proposed cut in the standard tax band is the best way to help those on low and middle incomes. Clearly it is not.  If Labour was really concerned with helping those on low incomes, as opposed to boosting its own election hopes, it would be bringing forward proposals to tackle stealth charges and user fees. It would be seeking a comprehensive and thorough review of the items to which VAT, which hits low-income families hardest, is applicable to determine the scope for introducing new anti-regressive and pro-energy-efficiency measures.  It would be seeking an increase in the minimum wage so it represented 60 per cent of gross average industrial earnings while keeping all those on it out of the tax net.”

Morgan went on to say that the proposal would do nothing to tackle the real inequities at the heart of the tax system.

The 2 per cent cut in the standard rate of tax will significantly reduce the revenue available to pay for public services. It is those on low and middle incomes — those without private healthcare and who do not send their children to private schools — who most rely on public services. When revenue is unavailable to pay for public services, the shortfall is always made up by bringing in higher user charges or forcing cuts in services.  This is the reality the public would face if Labour was to implement its plan.  And many voters recognise this. A a number of those vox-popped by RTÉ Radio 1’s Morning Ireland programme made these very same points.

However, unlike a justifiably cynical public, what has been most notable in relation to the Labour proposal is the absence of any media questioning of the party.  Where are the reasonable questions on how it intends to pay for many of its proposals, including its five core commitments that the party calculates at over a billion euro extra per annum while cutting taxes which are already well below European norms? It’s ill-conceived, developer-friendly housing proposals alone require €2.5 million of public funds to be set aside. As Arthur Morgan pointed out:

“What this proposal from Labour would do — like the FF/PD Government’s cut in the top rate of tax — is narrow the tax base and make the government ever more dependent on taxes related to consumption and the property sector.

“Sinn Féin is strongly of the view that a government needs to be in a position to ensure that it has the revenue to provide public services, to fund social protections and to address infrastructural deficiencies, especially when the present rate of consumption and construction slows down, as it is bound to do.”