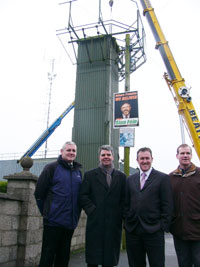 Crowds gathered to capture the moment on camera, mobile phone and camcorder as one of the most hated symbols of British military occupation was finally removed in the South Armagh village of Crossmaglen on Tuesday.

The British Army spy post which had towered above the barracks in Crossmaglen for a decade-and-a-half was an ugly, oppresive and instrusive eyesore, long resesented by residents of the strongly republican district.

The demilitarisation of South Armagh and other republican heartlands has been a key demand made by Sinn Féin throughout each stage of negotiations with the British Government.

The Sinn Féin MP for Newry and Armagh, Conor Murphy, welcomed the removal of the spy post and sangar.

“ This military post has been a blight on this community for too long.

“Local people will be glad to see the back of this eyesore and those who spied on them from within it.”

Although several spy posts have been dismantled in various parts of South Armagh recently, many of those who gathered in Crossmaglen on Tuesday described this particular removal as “highly symbolic”.

Its significance was emphasised by the fact that  the spy post’s demolition made news headlines across the world.

“ Sinn Féin is determined to ensure that all British military forces are removed from our communities.

“The land stolen and occupied must be returned to their rightful owners or put to community use.”