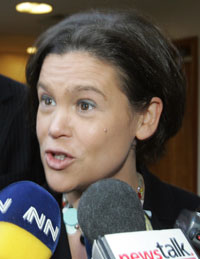 The EU Parliament has singled out the 26 Counties for failing to do everything in its power to prevent flights of extraordinary rendition through its air space and airports.

The Irish Government was strongly criticised this week in an official EU report on the alleged transportation of suspects by the CIA in so-called “rendition flights”.

The report says there have been more than 1,200 known landings across Europe, with 147 in Ireland, by CIA planes carrying ‘terrorist suspects’, or used to carry suspects.

The report also says the Irish Government’s willingness to accept verbal assurances from the US denying the activity falls short of  its international obligations on human rights.

It further highlights the lack of accountability of foreign intelligence organisation operating in Ireland and advocates a complete ban on CIA flights landing here if they cannot be searched.

Minister for Foreign Affairs Dermot Ahern is criticised for not answering all the questions when he appeared before the committee of inquiry in November.

“Today’s report by MEPs raises some critical issues which are about the core, fundamental rights of everybody in Europe and across the world.

“This report paints a shocking picture of human rights abuse and illegal activity, all of which was tolerated by EU member states, including Ireland.

“The Irish Government’s hear-no-evil, see-no-evil approach to illegal renditions is unconvincing and unacceptable.

“The report points out that at least 147 CIA-operated flights made stop-overs in Irish airports, including by aircraft involved in ‘extraordinary renditions’ — or kidnappings as we would normally call them.”

Mary Lou McDonald firmly placed the emphasis on the Dáil and the Seanad to act now.

“All of us who seek the truth about these kidnappings must raise this in our national parliaments and directly confront our governments.

“The real pressure must be applied at home where, on the eve of an election, the TDs who permitted and tolerated these actions will feel it.”