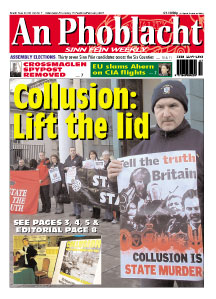 Murdered human rights lawyer Pat Finucane was remembered this week with hundreds of people gathering at Beechmount, West Belfast, for the unveiling of a mural to mark the 18th anniversary of his death.

The Finucane family said they are seeking a full, independent inquiry into the killing. An inquiry held under new restrictions imposed by the British Government would not be able to get to the truth, they insisted.

Addressing the crowd, Clara Reilly, of Relatives for Justice, described Pat Finucane as a man whose determination to champion the rights of others ultimately cost him his life.

“His reputation for going that extra mile in exposing the corrupt practices of government and the security forces often brought him into the media spotlight. The case of Pat Finucane is significant in that it commands local, national and international support.”

Local Sinn Féin Councillor Paul Maskey said that, after 18 years, the circumstances surrounding Pat Finucane’s death are still being covered up. “It is important that justice prevails for the Finucane family.”

Anti-collusion campaign group An Fhirinne marked the anniversary by picketing the office of Alastair Frasier, head of the Public Prosecution Service.

The group said it is in the public interest to bring cases highlighted in the Stevens and O’Loan reports before the courts.

“Unless these cases appear in court, you and your office will be forever seen in the eyes of all law-abiding citizens as being part of the problem.”

Meanwhile, the body of UDA assassin Mark Barr, believed to have been the second gunman involved in the murder of Pat Finucane, was discovered in North Belfast last week.

The 38-year-old was found at a football pitch in Forthriver Road last Wednesday week. The PSNI is not treating the death as suspicious and it is widely believed that Barr died as a result of suicide.

Barr was named during an application to the European Court of Human Rights in 2003, along with convicted murderer Ken Barrett, as one of two gunmen who burst into Pat Finucane’s home and shot him dead in front of his wife and children. In 1999, following the Stevens investigation, Barr was charged with possession of information likely to be of use to terrorists.

In 1993, Barr escaped conviction for the murder of North Belfast Catholic Dermot McGuinness despite the fact that his then girlfriend gave evidence against him. Barr was questioned but never charged in relation to the murder of the father of three. McGuinness was shot six times as he walked home along Rosapenna Street.

Barr died a short distance from where RUC Special Branch agent William Stobie, also implicated in the Finucane killing, was shot dead within hours of supporting the call for an inquiry into the Finucane murder. Stobie stood trial for the murder of Pat Finucane but the court case collapsed after Stobie revealed that he was a Special Branch agent at the time of the killing and the main witness pulled out of the trial on health grounds.

Stobie and Barr aren’t the only British agents to have met an untimely end. Others include Billy Wright and Robert Kerr, both of whom died in suspicious circumstances.

Wright is a focus of inquiries on foot of a recommendation by  the independent international investigator, Judge Peter Cory. Unfortunately, the inquiry is subject to the restrictions of the new Inquiries Act.

Meanwhile, new evidence suggests a connection between the murder of Dundrum businessman Jack Kielty in 1988 and the killing of Pat Finucane a year later. The gunmen who shot Kielty are believed to have come from the Highfield estate in West Belfast. Special Branch agent William Stobie lived in the Highfield estate and was the UDA ‘quarter-master’ at the time.

The guns used in the Kielty murder were later handed over to a Belfast-based UDA member in the Shankill Leisure Centre car park. The question is: was Stobie the man who received the murder weapons to hide for later use by the same gang again? According to the media, British agent  and UVF killer Mark Haddock and the man who killed Jack Kietly shared the same Special Branch handler.

• Pat Finucane’s son Michael and widow Geraldine, standing at the mural commemorating the anniversary of his assassination