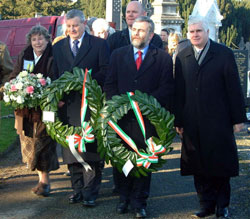 A wreath laying ceremony organised by SIPTU took place on Tuesday 30 January at the grave of James Larkin in Glasnevin cemetery.  It was the first in a series of events by the union to mark the centenary of the 1907 Belfast strikes, and the arrival of Larkin and mass trade unionism in Ireland.

Sinn Féin was represented at the event by Dublin City Councillor Daithí  Doolan.  Speaking at the ceremony SIPTU General President Jack O’Connor said that Larkin would be angered by the inequalities that still haunt our society 100 years after he first arrived in Ireland.  He also used the opportunity to salute Sunday’s Sinn Féin Ard Fheis decision on policing.