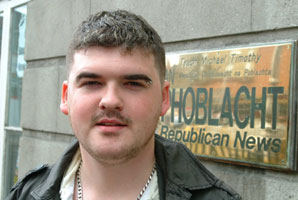 Hundreds of Ógra activists and dozens of Ógra delegates attended the Extraordinary Sinn Féin Ard Fheis last Sunday. In the previous week, Ógra organised an Extraordinary National Congress at which the organisation adopted a new policy calling for policing to be “decoupled from the state and proposed the establishment of municipal policing structures”.

At the Extraordinary Congress, Ógra urged delegates to vote against the Ard Chomhairle motion but to remain united regardless of the outcome.

Speaking on Monday about the outcome of the debate, Ógra National Organiser  Barry McColgan said: “We had a very comradely robust debate at the Ard Fheis. Many Ógra activists from across the country spoke very articulately in opposition to the Ard Chomhairle motion, stating many strategic and practical reasons.”

“While the position adopted was historically groundbreaking, the real test now is going to be in the practical implementation of the motion, and it is now that the real struggle on policing begins.”

Ógra activists spoke in favour of the alternative Ógra policing policy which aims to decouple policing from the state and to deal with policing in a revolutionary and stand alone context. As one Ógra delegate said, “are we going to support and endorse a force that actively works against our objectives, or to approach the issue of policing in a progressive way, not limiting ourselves to the staid old model of a monolithic police force?”.

He said the strength of the  movement was its ability to critically debate.

“Unity and cohesion is tantamount to the successful conclusion of our struggle – regardless of the decision that was reached  – a mountain of struggle remains ahead and only one movement are going to achieve our objectives.