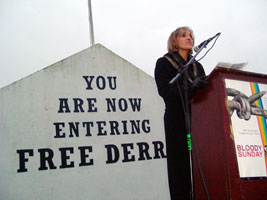 ‘Arrogance of British rule’ will be broken

Many thousands of people from across Ireland, Scotland and England turned out in Derry last Sunday 28 January to mark the 35th anniversary of Bloody Sunday.

On 30 January 1972, a day etched in the minds of many people not just in Derry but throughout Irealnd and many parts of the world, British paratroopers killed 14 civil rights marchers and wounded a further 14 people as they launched their assault on the people of Derry.

As Sinn Féin delegates debated the merits of critical engagement with the PSNI,  to ‘put manner on the police’  and uncover the full truth behind British state collusion with unionist paramilitaries, the fact that 35 years on from Bloody Sunday the families of the dead and wounded are still fighting for justice is proof that the British state does not give up its secrets easily.

As the marchers set off on their journey from the Creggan Shops, following the original march route, to Free Derry Corner many of their conversations centred on the historical significance of the day that was in it. “How would the Ard Fheis vote go”? many wondered. While a number of republicans, concerned at the latest political developments, marched behind their banner ‘Concerned Republicans Against RUC/PSNI’ it was cear from conversations that the majority of people on the march felt that the direction in which Sinn Féin was going was the right one.

The mood of the marchers was upbeat and determined.

Following the revelations in Police Ombudsman Nuala O’Loan’s report into collusion between the UVF and the RUC Special Branch and the obvious need for more campaigning work to uncover the full truth it was no coincidence that the theme of this year’s Bloody Sunday weekend was ‘Hold Power to Account’.

Some banners carried on the march also marked that theme. The unaccountable power of big business was the focus of Foyle Ethical Investment Campaign who are targeting the US armaments firm Raytheon.

The suppression of Basque nationalism by the Spanish state was also recognised as was the unfettered military power of Zionism.

Jamilla Asleh whose 17-year-old-son, who was shot dead by Israeli troops in 2002 walked at the front of the march with relatives of the Bloody Sunday dead and carried the banner Tell the Truth.

Jamilla’s son was one of 13 Arab Israelis shot dead by Zionists after the provocative visit of Ariel Sharon to one of Islam’s holiest sites the al-Aqsa Mosque in Jerusalem – a massacre ignored by the international community.

The rally was addressed at Free Derry Corner by Sinn Féin’s Martina Anderson, a Derry native and former republican POW, who had returned early from the extraordinary Ard Fheis to be at the commemoration.

“Holding Power to Account’, seems very apt given that Sinn Féin delegates are discussing whether republicans are now in a position to hold policing to account if policing powers are transferred to locally elected representatives.

“The decision which the special Ard Fheis will take is historic and is a result of the Sinn Féin leadership engaging with vast numbers across the 32 Counties. Our negotiators have engaged with you the people, who have borne the brunt of this war – which brought the British to the negotiating table.

“Just what they have managed to negotiate, they have shared openly with all of us. Our negotiators and our Army have won the framework we need to tackle sectarianism and break the arrogance of unjust power, of British rule in Ireland”.

Anderson recalled how, as a nine-year-old, she returned from Mass with her father to her home in Lisfannon Park and saw the British Army deployed around the area.

She remembered her father’s sense of fear as he shipped her and her two young sisters off to older sisters in Shantallow.

“Nor have I ever forgotten the panic in my older sister’s house when the news from the Bogside reached us that the Paras had run wild and civilians had been murdered”.

She cited the arrogance of the British army and British establishment to the victims of Bloody Sunday and their families, saying that that arrogance played a massive part in shaping her political beliefs – and her life.

“It influenced and shaped the lives of many young people right across this city and beyond. Since that day the families of the dead and injured have sought not the truth, we all know what happened on that day, but an admission from the British government about its role in the murder of 14 innocent people in our city – and its role in the subsequent cover up”.

Praising the families of the dead and injured the Sinn Féin candidate for this March’s Assembly elections said, “your campaign to uncover the truth, has shone a beacon light for hundreds of families across the North whose loved ones were murdered by the British State, whether they were in Derry, South Armagh, East Tyrone or North Belfast”.

She went on to say that the conclusions of the Bloody Sunday Inquiry will be examined across Ireland and beyond, for the potential of a new beginning in the relationship between the peoples living on these islands, a new departure, where the wrongs of the past can be dealt with in order to lay the foundations for a better future.

“There are times when history appears to take a great leap forward before our very eyes. Today is such a day”.

“We campaigned and supported the families’ campaign for the truth about Bloody Sunday when it was neither popular nor fashionable.

“We highlighted and exposed collusion and the role of the British forces in murders when no one was interested. We have never been under any illusions about the nature of Britain’s presence in Ireland, and that remains the case today. We will remove that presence from Ireland – and collectively we the people of  Ireland will manage our own affairs”.

Picking up on the interest around the O’Loan report into collusion the former POW stated, “Nuala O’Loan’s report highlighted the fact of collusion between loyalists and the RUC. Of course we knew about this.

“Republicans will guarantee that the days of partisan political policing, of collusion and the days of an Orange militia for an Orange state are over forever.

“We will put an end to sectarian policing, an end to the historical function of policing in this state – where one community policed another – and make it accountable to you the people, ensuring that it serves you, your families your neighbours and your friends – and not the state. So, let’s go forth with confidence in the knowledge that where it is found wanting, all of us standing as one, will challenge it - and change it.