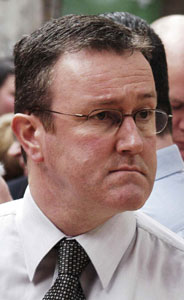 Speaking as the IMC delivered its latest report to the two governments Sinn Féin MP for Newry & Armagh Conor Murphy today said that it was time to end the negative role played by the IMC and remove the veto it is attempting to exercise over peoples’ democratic rights and entitlements.

Murphy said: “The IMC operates entirely outside the terms of the Good Friday Agreement. It should have no role in the political process and it should be wound up. The IMC should never again be allowed a say over peoples democratic rights and entitlements.

“Regardless of what this unelected and unrepresentative quango does or says Sinn Féin will continue with our positive agenda of attempting to ensure that the power sharing and All-Ireland institutions are put back in place by March 26th. That remains our firm focus.”