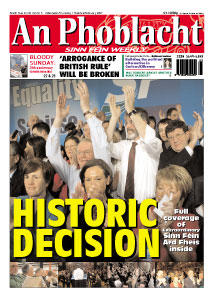 “Let’s not be upset by how others respond to today’s decision. The higher they build their barriers the stronger we become,” he said in reference to the likely reaction of DUP rejectionists.

“This ard fheis acted in the national interest. We look to others to do the same in the time ahead,” he added.

Political pressure now falls clearly onto the shoulders of DUP leader, Ian Paisley, to state publicly if he is prepared to enter a Northern Executive with himself as First Minister and Sinn Féin’s Martin McGuinness as Deputy First Minister on 26 March.

Paisley’s initial response was predictable. “Only with real delivery can the way be cleared for a full return to democracy, and the facing up to the every day needs and requirements of the people of Northern Ireland”, he said.

The vast majority of those who spoke at Sunday’s Extraordinary Ard Fheis at the RDS in Dublin were in favour of the Ard Chomhairle motion. Nearly 1,000 delegates were entitled to vote, with over another 2,000 visitors.

Urging delegates to vote in favour, Sinn Féin Chief Negotiator Martin McGuinness said: “You have a decision to make and it is a big decision. Today is decision day when Sinn Féin moves decisively forward.”

The Árd Fheis decision means that Sinn Féin will encourage people in the Six Counties community to co-operate with the police to solve crime in the community. However further progress will take longer and can only happen either with the return of the power-sharing institutions on 26 March or in the context of new all-Ireland partnership arrangements.

Taoiseach, Bertie Ahern, and the British prime minister, Tony Blair, both welcomed the decision. Ahern said it was a landmark move that “opened the way for inclusive support for policing throughout Northern Ireland. That is profoundly in the interests of everybody”. He said the timetable set out at St Andrews must be kept.

The transitional  Six County Assembly was dissolved at midnight on Monday, triggering the Assembly elections for 7 March.

Speaking in Stormont on Monday Sinn Féin President Gerry Adams said: “The Sinn Féin Ard Chomhairle motion was very clear and unambiguous. And it was overwhelmingly endorsed by the party membership at the Ard Fheis yesterday. The Ard Chomhairle will meet tomorrow to discuss the outcome of the Ard Fheis and its ramifications. But let me be clear. Sinn Féin is moving forward.

“The DUP has no veto over this motion or Sinn Féin’s approach to policing. No party can lecture any other party about law and order or set tests. The people we represent are as law abiding as anyone else.

“The motion sets out two contexts for progress. The first, the preferred one, is with the DUP in a power sharing Executive as set out in the Good Friday Agreement. However, if the DUP is unwilling to embrace power sharing then there is a second context. The two governments need to move forward with new all-Ireland partnership arrangements.

“Sinn Féin will work with them to assure that these arrangements are acceptable to republicans. However, whatever happens the DUP will have no veto, no block on progress.  And Sinn Féin is determined to move forward on the policing issue and all other matters.”

Asked about Sinn Féin’s attitude to crime and the police Mr. Adams said: “Let me be very clear. If any citizen is the target of crime, whether it be death riders, drug pushers or rape, or attacks on our elderly, if there are crimes against the people, against citizens, Sinn Féin will be urging and encouraging victims and citizens to co-operate with the police.  There is no equivocation or qualification on this.

“There are justifiable concerns about political dimensions of policing. Collusion for example needs to be tackled but at all of the meetings I did no one raised any question about the need for civic policing. The PSNI need to win the confidence of citizens. They do that by being professional, non partisan and genuinely civic. That is a public service for citizens.”

Speaking after a meeting of the party’s Ard Chomhairle in Dublin on Tuesday which discussed the outcome of the Extraordinary Ard Fheis Gerry Adams said: “Sunday was a huge day for Irish republicans. Despite the enormity of the issue and the personal experience of many of the delegates and their families at the hands of political police, party activists showed huge courage and leadership.

“The Ard Chomhairle met today to discuss how we now implement the position adopted at the Ard Fheis. We are calling on people in the community to co-operate with the police to solve crime and take criminals off the streets. The issue of political policing will take longer to resolve. Further progress will happen either with the return of the power-sharing institutions on March 26th or in the context of new all-Ireland partnership arrangements.

“I know that all of this is very difficult for many people and I know that it will take time for all of us to come to terms with what has happened in recent days.

“And there is a huge onus on the PSNI to earn the trust and confidence, which at this point does not exist.

“At the weekend when closing the Ard Fheis, I called on republicans to enter the next phase calmly and not to be put off by how others respond to our decision.

“The DUP’s reaction has been sadly predictable. Assertions by the DUP that they are going to test republicans don’t wash. They have no veto over how we deal with this issue. What republicans did at the weekend was done in the national interest and in the common good. It wasn’t done for the DUP. And they are in no position to lecture anyone on law and order.

“So, rather than unionist politicians competing with each other on a negative agenda surely now is the time to grasp the opportunity and adopt a more positive approach. This, I am sure would be welcomed by many unionist people.”

The motion passed by the Sinn Féin Extraordinary Ard Fheis can be read by going to http://www.sinnfeinonline.com/news/3189

Full Árd Fheis coverage including videos and speeches are available at http://www.sinnfeinonline.com

* Speaking to the media after a meeting of the party’s Ard Chomhairle in Dublin on Tuesday Mary Lou McDonald,  Gerry Adams and Martina Anderson

•  For further Ard Fheis coverage see our Features section on this site:

‘We can create a new beginning to policing’

‘The higher they build their barriers the stronger we become’

Extraordinary Ard Fheis:  Irish republicans can, if they want to, achieve anything

A party the likes of which this country has never seen