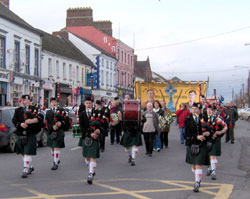 The annual parade and commemoration in honour of Séan O'Carroll and Patrick Tierney, two young IRA volunteers killed by Black and Tans in 1920, was held on Sunday 26 November in Ardee, County Louth.

The parade made its way from Fair Green to the monument at Drogheda Road where proceedings were chaired by Sinn Féin Louth County Councillor Pearse McGeough. Wreaths were laid on behalf of the families of the two men. There were also wreaths from Louth Sinn Féin Comhairle Ceantair, O'Carroll Tierney Cumann, Sinn Féin and the Geeney/McGeough Cumann. Sally Baylon, sister of murdered Sinn Féin Donegal County Councillor Eddie Fullerton laid a wreath on behalf of the Republican Movement.

The main speaker was Sinn Féin Louth TD Arthur Morgan who paid tribute to the two Volunteers being commemorated.

Morgan said the brutality visited by the Black and Tans did not work in November 1920, and it did not work when modern day Black & Tans in the form of the British Parachute Regiment took IRA Volunteer Peter Cleary from his house in South Armagh and shot him dead.

He said the people of Louth and in Armagh had given their answer to British brutality on many occasions.

"In Armagh, the election of Connor Murphy as MP and nearly a dozen Sinn Féin Councillors is testament enough for me to understand that these people will never be bullied or shot in to submission.

"The huge support for republicans in Louth is also obvious -- five County Councillors returned in 2004 plus half a dozen more Town Councillors.

He said Sinn Féin in Louth would defend the republican seat, first won by Paddy Agnew in 1981 on a H Block ticket, with determination in the forthcoming general election.

Morgan said republicans could face two elections in quick succession next year -- one in the North in March, followed by another here, probably in May. "A huge challenge. But we are ready for that challenge", he said.

He went on to say that republicans were ready to sort out all remaining issues and obstacles required for power-sharing in the Six Counties.

"Political prisoners, On-The-Runs and Policing are among these out-standing issues. We have been over this territory many time in the past. We have the confidence and the ability to sort it out positively."

He said republicans had been the drivers of change for decades.

"Let us keep up that drive with energy and commitment. Let us complete the objective sought by Séan and Patrick -- and by so many others before them and since. Play your part and deliver Irish freedom, justice and equality for everyone on the Island", he said.