Gun and bomb attack at Stormont 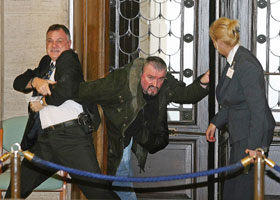 "Madness," said the banner headline of the Belfast Newsletter. The actions of a "lunatic" proclaimed PSNI Chief Constable Hugh Orde, " a sad publicity stunt by a very sad individual". A "farce" concluded the Irish News. A "Walter Mitty character," a narcissus "in love with himself as much as the limelight", said the Sunday Tribune.

In full view of the waiting media, wild eyed and shouting "No surrender" and accusing DUP leader Ian Paisley of a "sell-out" Milltown killer Michael Stone burst through the main entrance of Stormont's Parliamentary Buildings to launch a bomb and gun attack.

Brandishing a handgun, Stone threw an ignited device into reception shouting it was a bomb. Eight devices were later recovered and described as viable but crude. Stone was also carrying a hunting knife. Initially it was unclear whether the gun used in the attack was real or a replica. Stone appeared to be wielding a 9mm Browning pistol the same type of weapon he used during the attack on mourners at Milltown in 1988.

The Stormont attack took place just yards away from the debating chamber where a full Assembly was in session for the first time since its illegal suspension in 2002. Forty minutes into the proceedings the alarm sounded. Disbelief was the first reaction of the MLAs but moments later Assembly Speaker Eileen Bell confirmed the chamber was to be evacuated.

Meanwhile civilian security personnel grappled with the fifty-something year-old loyalist, trapping him in the revolving doors where he was eventually disarmed, overpowered and dragged outside. Curiously Stone appeared to have taken the time to spray paint, "Sinn Féin IRA" at the entrance of the building before launching his attack.

Eight PSNI officers present during the attack made no attempt to assist civilian security personnel as they struggled to disarm the assailant. PSNI Chief Constable Hugh Orde confirmed officers assigned to protect MPs had been present but had not intervened because of their "specific role".

Politicians, journalists and members of the public, including pupils from Belfast's Irish medium secondary school, Mean Scoil Feirste, were escorted outside through a side entrance.

Stone was later taken under armed guard to receive treatment at a Belfast hospital before being drive to Antrim barracks. At a brief hearing at Laganside Courthouse, Stone faced five charges of attempted murder relating to Sinn Féin President Gerry Adams and Chief Negotiator Martin McGuinness, the two security guards who arrested him and a fifth person.

Stone was also charged with possession of explosives, an imitation firearm and articles likely to be of use to terrorists, believed to be a garrotte and an axe or knife. Dressed in a blue boiler suit and walking with crutches, Stone shouted "No sell-out, No power sharing, No surrender" before being led from the court.

Released on licence under the terms of the Good Friday Agreement, Stone faces being returned to jail to serve the rest of his sentence, a minimum of 30 years, as well as any additional sentence arising out of his latest attack.

So can all of this simply be dismissed as the work of an insane, egocentric, past his sell-by-date loyalist acting alone and out of step with the rest of unionism? Hugh Orde, most of the media and the UDA would like us to believe just that.

It was left to Susan McKay writing in the Irish News to remind us of the context within which Stone staged his attack.

"There's been much talk about farce and pantomime but demented Michael Stone with his ludicrously predictable speech from the dock is a figure from a far more sinister sort of drama," said McKay.

Identifying Stone's speech as "pure Paisley" and reflecting sentiments delivered by the DUP leader himself last summer, McKay cites Stone's action within the context of myths perpetuated by rejectionist unionism.

The DUP " has encouraged loyalists to believe the threat from the IRA is still real" and "the UDA and the UVF have used this as an excuse to hold onto their guns".

Speaking in the British House of Commons last week the DUP leader and his party colleague Upper Bann DUP MP David Simpson spuriously attempted to attribute the recent terrible murder of Lisa McClatchey in County Armagh to "republican scum". In fact the victim's Catholic partner appears to have been the primary target in the attack.

"Paisley's tendency is always to heighten Protestant fear and minimise Protestant responsibility for sectarian violence. Stone and his ilk have learned well. Stone is going back to jail. Paisley can be the first minister if he wants," said McKay.

Portraying Michael Stone as a madman not only lets reactionary unionism off the hook, it also allows the British state to remain unaccountable for the monster of unionist paramilitarism, a monster it carefully schooled, armed and directed for so many years.