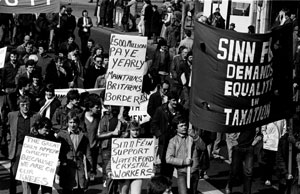 Sinn Féin protesting against the high tax rates for PAYE workers, and the lax approach to tax dodgers, during a tax march in Dublin in 1983

SF faces ideological wrath of those opposed to wealth redistribution

Eliminating poverty for Sinn Féin is not a mere sound bite -- it is one of our core objectives. That is where we differ from other parties and it is why we will face the ideological wrath of those opposed to any form of fundamental social change or wealth redistribution.

Sinn Féin launched its Pre-Budget submission 'Putting Low Income families First' last week. The Irish Times and Irish Examiner covered the submission launch reasonably fairly, and it was obvious that the journalists in question -- Mark Hennessy and Aine Kerr, had actually read the document. However, in a wildly misleading and ideologically-driven piece in the Sunday Tribune, Shane Coleman, commenting on the submission, accuses Sinn Féin of trying to drive the 26 Counties back to the 1980s.

As evidence does for his outlandish allegation Coleman references the fact that Sinn Féin is proposing minor increases to corporation tax. This 5% increase would see corporation tax at 17.5% remain one of the lowest rates in the EU and approximately a third of what it was in the 1980's.

He also references the fact that Sinn Féin is proposing increasing capital gains tax. This increase would mean that windfall profits would no longer be taxed lower than earnings. Coleman also makes his accusations on the basis that Sinn Féin proposes increasing social welfare rates and the state non-contributory pension. These are increases which are necessary as present rates are inadequate to keep people out of poverty as demonstrated by a comprehensive study launched by the Vincentian Partnership for Social Justice last week. He lauds our objective while snipping at our proposals.

The reality is that it is not good enough merely to aspire to eliminate poverty and recoil from setting out any programme to achieve this objective.

Coleman, in discussing the cost of the necessary changes, chooses to ignore entirely the savings rising from the phasing out of tax breaks for private pension which cost a whooping _2.7billion in 2002 (the latest year for which figures are available) or from removing the regressive Employee PRSI ceiling.

So why all this talk about the 1980's? There is an attempt by those opposed to Sinn Féin's agenda for change to link our progressive tax reform proposals to a folk memory of the unjust tax regime of the 1980's. This is manipulative nonsense. The very people who Sinn Féin is seeking to assist are those who bore the burden of tax in the 1980's. It is the very people who took to the streets in the tax marches of 1979 and 1980 that Sinn Féin is committed to working on behalf of. It is the same people who bore the burden of the unjust tax system of the 1980's who today suffer because of mismanaged and under-resourced public services.

The tax marches were not protests merely against high tax, but were against an unjust and inequitable tax regime. People marched against the unfair tax burden on the PAYE sector and against the fact that the self employed and the farming sectors paid little while companies and the wealthy were able to avoid and evade tax.

The demand of those who marched for a fair and equitable tax regime has yet to be achieved. As part of reform to create such a system Sinn Féin's pre-budget submission actually proposes lowering the burden of tax for those on low and average incomes. Funnily enough when the argument is made in favour of targeting tax cuts at the lowest earning -- those on the minimum wage and those on or below the average industrial wage these cuts are deemed unsustainable by the same people who argue vociferously in favour of a cut in the top rate of tax. It is a question of priorities for them as it is for us and we make no apologies whatsoever for putting low incomes families first.