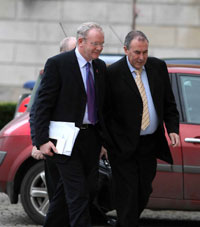 Another day in the inch-by-inch process

The day had been billed as a significant if transitional milestone during which the two largest parties, the DUP and Sinn Féin would indicate their nomination of the First and Deputy First Minister.

Gathered in the Great Hall at Stormont for the first time since the British government's illegal suspension of the Assembly in 2002, the MLAs took their places shortly after 10am.

Priding himself as a man of plain speech, DUP Leader Ian Paisley addressed the chamber, describing it as "one of the hardest statements I have ever made".

Predictably Paisley claimed delivery was in the hands of Sinn Féin. Accusing Sinn Féin of equivocation and hesitation on the issue of policing, Paisley said only when Sinn Féin backed the police and met "other commitments" could progress be made.

"Delivery is in the hands of Sinn Féin and there can and will be no movement until they face up and sign up to their obligations", said Paisley.

"Clearly as Sinn Féin is not yet ready to take the decisive step forward on policing, the DUP is not required to commit to any aspect of power-sharing in advance of such certainty.

"Circumstances have not been reached that there can be a nomination or a designation this day. I have made clear my aim, hope and desire for the future. Throughout the DUP consultations, it was stated if and when commitments are delivered the DUP will enter government", he said.

"At that time, there will fall to me a judgement consistent with the policy that delivery on the ground is a basis for moving forward", said Paisley.

Along with the DUP, said Adams, republicans also faced challenges in the months ahead. "But I believe that all the parties in this chamber and the two governments can overcome these challenges", he said.

"With goodwill we can create a space in which all the issues of difference including policing and power sharing and poverty or any other matter can be dealt with satisfactorily.

"Today is another day in the inch-by-inch process of putting the political institutions back in place", said Adams.

Accepting the nomination, Martin McGuinness said if it was the will of the people and Sinn Féin, he would represent the people as Deputy First Minister.

"I will carry out my responsibilities and duties conscientiously and will respect and promote the common good of all our people at all times", said McGuinness.

Sinn Féin's position was clear but what about the DUP? With debate in the Assembly Chamber cut short Sinn Féin and other parties began intensive discussions with the two governments urging clarification from the DUP leader.

A statement from the DUP leader designed to set the record straight was issued within hours. "I have always said, as I said today in the Assembly, what my intention will be if policing and all the other outstanding issues that are before us are settled", said Paisley.

"Everyone already knows that in those circumstances after they are delivered I would accept the First Minister's nomination provided the election results are favourable", the DUP leader said.

"I think Ian Paisley obviously recognised the importance of saying something to clear up the confusion that had occurred in the morning", said Martin McGuinness.

Paisley's commitment might not have been explicit during Friday's deadline session in Stormont's Great Hall but neither had he demurred when Speaker Eileen Bell announced the DUP leader had satisfied the criteria for nomination set out in the directions passed down by the British Secretary of State, Peter Hain.

There had been DUP rumblings earlier in the week from within the ranks of Paisley's Free Presbyterian Church. Minister Ian Foster, while declaring his undying admiration for his church leader, bemoaned the prospect of his moderator sharing power with republicans in Stormont.

There had also been rumblings of dissent in the British House of Commons, where DUP MP Nigel Dodds claimed Sinn Féin's acceptance of policing and justice might not happen for a "political lifetime". Hain dismissed Dodds intervention as "inflammatory".

Within hours of their leader's address to the Assembly, 12 senior DUP politicians contacted the media to distance themselves from any interpretation of Paisley's speech as accepting power sharing with republicans under specified circumstances.

"Nothing that we have said or done today can be taken by the [British] government as an indication that they can imply Shadow, Designate or any other status to anyone in relation to the office of First and Deputy First Minister", said the statement.

But as far as Taoiseach Bertie Ahern was concerned any lack of clarity during the morning session had been cleared by the afternoon statement.

"I think the matter is back to where I had hoped it would be in the morning. There is clarification on the two issues, power sharing will happen with the DUP if Sinn Féin deals with the issue of policing", said Ahern.

Speaking to the media the DUP leader dismissed any notion of a split within his party and again made it clear that if certain conditions are met he will become First Minister in a power sharing government. And as for differences within the DUP, Paisley said he believed party members now had a better understanding of where they were going.