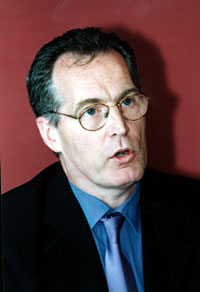 Sinn Féin spokesperson on Justice issues Gerry Kelly said on Tuesday that he was satisfied that the British Government was now finally legislating to bring about an end to the Diplock Court system in the North. Kelly's comments came as he prepared to meet the Independent Reviewer of repressive legislation, in Stormont.

"Non jury Diplock courts in the Six Counties were a repressive measure designed to fast-track the imprisonment of republicans in a conveyor belt manner. Ending the use of repressive measures like Diplock Courts has been a key objective of Sinn Féin in our negotiations with the British government over many years", Kelly said.

"Sinn Féin secured a commitment from the British government to end the use of Diplock Courts and we are satisfied that the British government are now legislating to honour this commitment. We met the British Minister responsible for the consultation into this legislation David Hansen in early September, we again raised the issue at St. Andrews and we will be meeting with the Lord Carlisle today in Stormont to discuss this and other related issues.

"Nationalists and republicans, who have in the past been the victims of a repressive justice system need to have confidence that things have changed and changed for good. Sinn Féin remain committed to ensuring that we see a complete transformation in the Justice system and we remain engaged with the British government on this issue', said the Sinn Féin MLA.

Meanwhile Aengus Ó Snodaigh TD called on the Dublin Government to follow the British Government's example and get rid of the Special Criminal Court and the Offences Against the State Act in the 26 Counties.

"Non jury Diplock in the Six Counties were designed to fast-track the imprisonment of republicans in a conveyor belt manner. The special Criminal Court was set up in much the same manner as the Diplock Courts. However, Justice Minister Michael McDowell has been moving in the opposite direction to the British. He has consistently supported the broadening of the use of the Special Criminal Court despite the UN twice calling for an end to its existence", Ó Snodaigh said.

"Repressive legislation has no place in a democratic state in the 21st century and certainly not in Ireland 12 years into the peace process, nine years into a continuous cessation by the Irish Republican Army, eight years after the conclusion of the Good Friday Agreement, and more than a year after the IRA formally ended its armed campaign and put arms beyond use.

"The ending of the Special Criminal Court and the repeal of the Offences Against the State Act are required under strand three of the Good Friday Agreement which was endorsed by the vast majority of people on this Island. Michael McDowell must act on this endorsement", he said.

The Court of Criminal Appeal on Tuesday dismissed an appeal by two Dublin republicans -- Niall Binéad and Kenneth Donohoe against their convictions by the Special Criminal Court in 2004 for IRA membership.

The Special Court had examined secret Garda files relating to the two men which were sealed and returned to Gardaí. After reading the files the court said it was satisfied Garda Special Branch had adequate information that each of the accused were IRA members. The case highlighted the Kafkaesque nature of the court's operation as a conveyor belt for imprisoning political suspects.