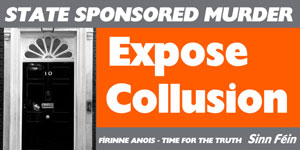 An Oireachtas report published on Wednesday evening points to British collusion with unionist paramilitary death squads involved in a series of bombings and murder in the 1970s.

The report from the Oireachtas Committee on Justice, Equality, Defence and Women's Rights looked into 18 different killings in the 26 Counties.

The Oireachtas Committee looked at the fourth report of Justice Henry Barron into the bombing of Kay's Tavern in Dundalk, Dublin Airport, the Three Star Inn in Castleblaney, an attack on the Miami Showband and other incidents.

It points clearly to collusion between unionist paramilitary groups and British state forces.

Several loyalists as well as members of the crown forces who were suspected of involvement were named in Justice Barron's report into which the Committee has been holding hearings.

The Oireachtas Committee found that there is indeed extensive evidence of British state collusion in loyalist paramilitary activities during the 1970s. The Northern Ireland Office (NIO) and RUC failed to co-operate with inquiries into many of the murders

The report was published by the Committee at Leinster House on Wednesday -- one day before the Taoiseach was due to meet with relatives of the Miami Showband.

Commenting on the Report Sinn Féin Dáil leader Caoimhghín Ó Caoláin has said that the Taoiseach Bertie Ahern should accept no more excuses from the British government and should press for full disclosure about the role of collusion in its war in Ireland. He called again for the Taoiseach to demand a special summit meeting with Tony Blair devoted solely to the issue of collusion.

Ó Caoláin stated: "Today's report is yet another nail in the coffin of British government credibility on the issue of collusion. It reinforces the case that the Mid-Ulster UVF, which was responsible for the fatal bombings at Dublin, Monaghan, Dundalk, Castleblaney and other attacks, acted in collusion with British crown forces. The Report again highlights the fact that the Mitchell farm at Glennane, County Armagh, was the UVF base for attacks, that members of the RUC and UDR were members of the gang and that British crown forces at higher level were well aware of what was going on there.

"In addition the Committee has again criticized the British authorities for their failure to co-operate with the Barron investigations and with the Committee's own work.

"The Taoiseach Bertie Ahern should accept no more excuses from the British Government and should press for full disclosure from that Government and all its agencies about the role of collusion in its war in Ireland. Successive reports and investigations, including today's, have shown how unionist paramilitaries were used by British armed forces, including the British Army, the RUC and MI5, as surrogates in their war. Civilians in Ireland were deliberately targeted in order to terrorise the entire nationalist population.

"This report again underlines the need for a special summit meeting between the Taoiseach and the British Prime Minister devoted solely to the issue of collusion."