Policing: There can be no role for MI5 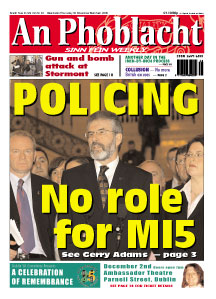 All of the outstanding issues can be resolved

I want to welcome Ian Paisley's commitment to take up the post of First Minister and to share power with Sinn Féin once outstanding issues are resolved, and if the electorate so decide. I do not underestimate the challenge this is for Sinn Féin and for many republicans and nationalists. Nor do I underestimate the challenge a power-sharing arrangement presents for Mr Paisley and the DUP.

However, I am confident that all of the outstanding issues can be resolved, including that of policing. Sinn Féin is for policing and a fair and effective legal and judicial system which is transparent and accountable. That requires a different policing experience to the one we have known.

Republicans and nationalists are against criminality. Those who target the young and the elderly, those who deal in drugs and rob and assault our senior citizens, as well as the rapists and racists, have to face justice.

In all of the countless negotiations we have had on this issue in recent years Sinn Féin's strategic goal has been to achieve a civic policing system which is accountable to citizens and representative of the community as a whole.

A number of key matters remain to be resolved. Central to these are the exercise of power and accountability over policing and justice. It is unreasonable to expect politicians or citizens to take responsibility for policing and justice and yet have no real authority over these matters.

Policing and justice are vital, fundamental issues of concern for every citizen. The Assembly and Executive should have the same rights in respect of these matters as for health and education and environment and so on. It makes sense. I believe we can find agreement on this.

What is needed is a definitive timeframe, a date, for the transfer of power and the departmental model into which power will be transferred. This isn't rocket science. It is about parties taking straightforward and practical decisions.

Some DUP politicians have said this matter cannot be resolved for several political lifetimes. That is unsustainable. Arguments about trust and confidence are in my opinion fundamentally bogus. None of our political parties trust each other. That is universal. It is not unique. It is the nature of politics. In our situation this distrust is heightened by decades of injustice, division, discrimination and the last 30 years of conflict.

Very few nationalists or republicans trust the agencies of the Northern state. This is particularly so, and with good reason the case with policing agencies, whether the old RUC, the B Specials and other local militia, or the PSNI.

Significant progress has been made in making the PSNI more accountable but because of the sectarian and repressive history of policing in the Six Counties the PSNI will have to do a lot to earn the confidence of most nationalists.

Some, in this post conflict period, may think this is unfair. But the fact is that there was partisan policing which engaged in harassment, torture, assassination, shoot-to-kill, plastic bullet murders and maimings and collusion with death squads. That is why the Good Friday Agreement required 'a new beginning to policing' as an essential element of the peace process.

That is why policing is such an emotive issue. And because many RUC officers died or were injured in the conflict it is understandable that this emotion affects unionists as well as nationalists.

That is why there is a need for interlocking processes and measures to compensate for the lack of trust and confidence. And the truth is there is not a single political player who does not know this. So, crucially we need local accountability and control of our policing and justice structures. We need to take control of policing and justice away from London.

The British government also needs to deal with a number of matters which remain under its control; principle among these is the role of MI5. There is no role for MI5 in civic policing. The PSNI cannot serve two masters. Neither can there ever again be a force within a force.

So, there is a job of work to be done on these issues. Can they be resolved? Yes. And let there be no doubt that even if and when these matters are resolved, there will still be a lot of work to be done by everyone to win nationalist and republican confidence in the PSNI. Indeed some republicans may argue that the British connection and the partition of Ireland prohibits support for any policing agency in the North. But Sinn Féin believes that none of these problems are insurmountable. We are up to the challenge of resolving these matters.

Let me be very clear about this. I am committed to calling a meeting of the Sinn Féin Ard Chomhairle immediately when these issues are resolved. This Ard Chomhairle meeting will be for the purpose of convening a special Ard Fheis within the timeframe set out at St. Andrews.

However, let me be equally clear that I will not go to the Ard Chomhairle to seek a special Ard Fheis unless I have the basis to do so.

In order to expedite these matters Sinn Féin will intensify our contact with the British government. We are prepared to meet with the PSNI Chief Constable Hugh Orde on issues which fall within his remit and we will sit down with the DUP and other parties at any time to agree other issues.

I am determined to make clear to the widest cross section of national public opinion and especially unionist people that I am determined to see all these issues dealt with as quickly as possible and, as I have said, within the timeframe set out at St. Andrews. If the two governments and the other parties are of the same mind then there is no reason why this cannot happen.

Making the peace process work is exhausting and frustrating. It is far from a perfect process and republicans are not naive. I have repeatedly said that progress is very much inch by inch.

I would appeal to nationalists and republicans to stay focussed, united and patient through this difficult period.