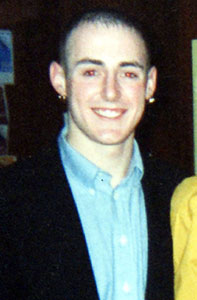 The parents of murdered teenager Gerard Lawlor believe the PSNI deliberately thwarted the investigation into their son's killing in order to protect Special Branch agents.

The family has called on Ombudsman Nuala O'Loan to investigate the PSNI's failure to arrest Gerard's killers despite their having been identified by two witnesses.

The 19-year-old was shot dead by two UDA gunmen on a motorbike as he walked home from the Bellevue bar in July 2002. The killing was the fourth UDA shooting in North Belfast that night.

A year later a senior PSNI officer, Detective Superintendent Roy Suitters, admitted that the PSNI had not arrested or questioned anyone for the murder despite knowing the identity of the killers.

"We have no forensic evidence, no witnesses, no information," Suitters claimed at the time. The PSNI officer said that he was depending upon the suspects "making admissions".

Without the suspects being questioned, it is difficult to guess the context within which the PSNI investigating officers imagined these "admissions" might take place.

Initially the Lawlor family believed the PSNI were investigating the killing of their son but, following a series of apparent failures in the inquiry, the family became suspicious. They became increasingly concerned that there had never been any serious effort to catch Gerard's killers.

An anonymous caller identified a well-known associate of loyalist leader Johnny Adair as having visited the Bellevue bar several times in the week before the shooting. The suspect was never arrested.

The motorbike used in the killing was later found at a house belonging to a relative of a well-known North Belfast loyalist suspected of involvement in the murder.

A female PSNI officer identified one of the suspects from a photofit, but no ID parade ever took place.

A witness, identified only as X, contacted the PSNI within days after the killing to identify two loyalists as having admitted to the murder several hours after the attack. Neither suspect was arrested.

After hearing nothing for four years, the witness contacted the PSNI again and made a statement identifying the two suspects and outlining their confessions. The witness offered to give evidence at any subsequent trial.

The PSNI have claimed that they have no record of the original telephone call made by Witness X. The Lawlor family subsequently discovered that the PSNI had refused to investigate Witness X's claims without corroborating evidence.

Speaking to the media, Sharon and John Lawlor said that they now believe the PSNI investigation was "nothing more than a sham". The family hopes the Ombudsman will uncover the facts.

"We want to know why the police do not appear to have followed up on three different people's evidence about who may have been involved in Gerard's murder," said his mother.

Meanwhile the parents of RIR soldier Cyril Smith, killed by an IRA bomb in 1990, have taken their case to the Ombudsman following claims by a former FRU operative that their son was sacrificed in an operation designed to discredit republicans.

The PSNI is holding a database containing the DNA profiles of over 3,000 children.

Responding to a request under the Freedom of Information Act the PSNI admitted to storing the information on young people under the age of 18.

They further disclosed that 1,119 of the DNA profiles on their database were of people who had never been convicted of any offence or faced criminal proceedings.

Responding to the disclosure Sinn Féin's Patricia Logue is calling on the British government to destroy all children's DNA profiles being held by the PSNI.

"The PSNI must not be allowed to use the excuse of arrests for minor offences to be used as an opportunity to collect DNA and other personal information for a criminal database".

The figures came to light just days after Derryman Paddy Millar forced the PSNI to destroy the DNA profile of his 11 year old daughter Sarah Leigh who was arrested earlier in the year and charged with writing graffiti.

Paul O'Connor of the Pat Finucane Centre, who made the initial request under the Freedom of Information Act, described the holding of DNA profiles on children as, "a serious infringement of the rights of these children".