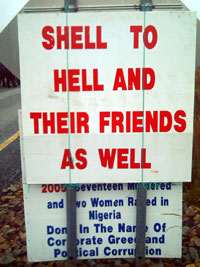 Protest pickets were maintained at the Corrib gas terminal in North Mayo again this week following a Shell to Sea national Day of Action last Friday, 20 October. On Monday a sit-down protest was broken up by Gardaí and on Tuesday about 100 members of the Shell to Sea campaign again took part in a silent protest march at the site.

"We weren't counting on any major numbers and we'd no specific plan of action for the day. The show of solidarity was very, very welcome. We ended up with over 300 people present from Galway, Donegal, Dublin, Cork, Belfast - people from all over the country.

"Because of the large numbers the convoy when it arrived couldn't get by. The Gardaí then started their pushing and hauling again which they'd done a number of times previously. Things had been relatively calm the week before. The numbers formed a blockade and that was the main action for the day.

"There was no co-operation with the Garadí from the protestors and the traffic was stopped. Local traffic was allowed through and many of these drivers would have been people who supported and even participated in the campaign over the months.

"We spread out to allow a slow flow of traffic. The protest became a long procession of non-co-operation.

"There were minor injuries. The Gardaí were pulling people by the hair and we experienced that previously. They were trying to start a fight. Over the past three weeks the Gaurds have been trying to provoke a fight.

Asked if he was optimistic about the protestors' chance of winning their campaign Monaghan said: "We're very upbeat. We know from various sources that the Guards originally expected it all to be over within 48 hours. It's getting worse for them because of the protracted nature of the campaign and they need all the numbers they can get. Shell has upped the game and they drew a lot of opposition, delaying their operation. Shell asked for a police presence.

"There's one thing we'd like to make clear. It's the Shell project we object to. We don't have a problem with the workers or the Guards - it's the project we're objecting to in the way they are trying to conduct it."

For John Monaghan the health and safety factor involved in the proposed Shell project is grave.

"For me it's definitely the health and safety factor. I've a six-month-old daughter. It's for my wife and child I'm doing it. I've had to stop all work other than campaigning. My life has been put on hold over the year since I got involved in the campaign. An awful lot of people have given an awful lot of time to the campaign. I know of one young fella who actually gave up his job altogether because of pressure he was getting at work for coming out on the picket line."

"We're not going to go away. We have no choice. We're fighting for survival. My wife and myself are currently building a house in the area. We should have been in that house in 2005 but that's been put on hold.

"There are children who get involved after school hours. They're getting a great education out of school hours."

Asked if the whole issue had caused divisions within the community he said the sad fact was that some divisions had been caused in instances where one member of a family could be a campaigner while a relative might be working in security at the site.

Again on the Gardaí he said: "We've gotten to know some of the Gardaí at this stage - they've been here long enough. Once you get to talk to some of them one-to-one you can see that some have sympathy for what we're doing but they can't come out and say it. Basically they know the Shell project is wrong but they feel they have to do their job.

"It's coming close to endgame. The Shell project cannot be sustained. Without the delays caused to the project by the Shell to Sea campaign the project would have taken three years and we're certainly going to create as many more delays as possible. The local community do not accept this project. It is not workable. The stance we've taken all along is for Shell do it right."

At 35 years of age it is the first time Monaghan has felt compelled to get involved in a campaign of this nature.

"Before this I was just interested in living - in ordinary things like football but I'll give my all to this campaign."

Meanwhile hot on the heals of allegations, last week, that Shell had offered a Mayo businessman, Ciarán Ó Murchú €15,000 to support the Bellanaboy gas terminal and associated pipeline, comes allegations that the company is now offering cash sums to farmers along the proposed gas pipe route.

Writing in Village magazine on 19 October Frank Connolly claimed that farmers in the Sruhwaddycon Bay area, through which the pipe is intended to pass, had been offered sums of €10,000 payable this November with a follow up payment in November 2007 of the same amount. The payment is said to be for loss of grazing land and associated disturbance associated with the seizure of land by the state, to Shell's benefit, through Compulsory Purchase Orders.

Some campaigners believe that the heavy Garda tactics in Bellanaboy having failed to quell popular local opposition to the pipeline may well have prompted Shell to adopt a new carrot and stick approach in an attempt to divide opposition.

Sinn Féin spokesperson on natural resources, Martin Ferris TD has said that there are numerous and well founded allegations of large cash offers to numerous people in the area.

Shell to Sea campaigners are planning another national mobilisation for Friday 10 November. This date is the anniversary of the execution of Ken Saro-Wiwa and eight other anti-Shell activists by the Nigerian military dictatorship in 1995.

For more information or directions to Bellanaboy send an email to [email protected], or call or text 0871323369.