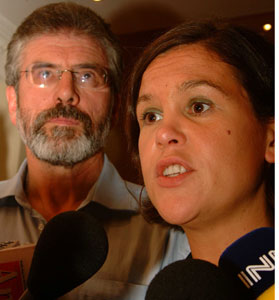 The Ard Chomhairle agreed on a widespread process of consultation within the party on the proposals put forward by the Irish and British Governments at St Andrews. The meeting appointed party chairperson Mary Lou McDonald MEP, Martin Ferris TD and Conor Murphy MP to take charge of the consultation process and to report back to the Ard Chomhairle.

Speaking after the meeting, Gerry Adams said: "There was widespread support at today's meeting for the party's objective of advancing the Good Friday Agreement and bringing about a situation where Martin McGuinness and Ian Paisley would be equal partners at the head of a power-sharing government.

"Ard Chomhairle members raised a number of concerns in relation to the role of the two Governments and the commitment of the DUP to properly participate in a power-sharing government with Sinn Féin.

"Obviously, the decision of the DUP to pull out of the Programme for Government meeting on Tuesday in Stormont highlights the challenges that lie ahead if the process is to move forward.

"There was a consensus at the meeting that work needed to continue to resolve outstanding issues which continue to block progress towards creating a policing service which is democratically accountable and free from the sort of political control which has blighted policing in the North for generations. We remain determined to reach that point and discussions with the Governments will continue in the weeks ahead."

Also speaking after last Thursday's Ard Chomhairle meeting in Dublin, Mary Lou McDonald said that the Sinn Féin consultation into the Governments' St Andrews proposals would be "exhaustive" but that it was expected that the process would be concluded in a matter of weeks.

Speaking to An Phoblacht this week, the Dublin MEP said that Sinn Féin was working out the mechanics of the party consultation process.

"While three of us - Martin Ferris, Conor Murphy and myself - are spearheading the process, there is a sub-group in place arranging the logistics involved - the numbers and locations of meetings in the various areas, etc.

"This will be a comprehensive process of consultation, reaching all levels, and is expected to start this weekend, and next week it'll be up and running. This is about broad political consultation, debate and discussion on the best way forward for the party. We'll be looking at where we're at in terms of the wide range of issues affecting our struggle.

"The process is about plotting a pathway into the future and surveying the political scene. Obviously we'll be looking at the outcomes from St Andrews and the current phase of negotiations, but it's broader than that."

McDonald feels very optimistic about current events and about the upcoming process of discussion and consultation within the party.

"Naturally enough there will be concerns, but I think also that there's a sense of optimism."

She believes that this optimism extends beyond the party and throughout the community at large.

"The very fact that Ian Paisley has said yes, even if it was a qualified yes, says something. This is a big step for rejectionist unionism and the DUP. That's a very positive thing and I think people identify the opportunity in that, while also recognising that there are outstanding issues and that there are various things that remain to be hammered out.

"Our own people are also aware that contacts with the two Governments are ongoing, so there's generally an upbeat mood about."

For McDonald this is a time of great opportunity.

"I think we're living in a time of huge opportunities for republicans and for the republican project, and I hope that in the course of consultation they will be looking at those opportunities, and in very real ways, in terms of how we can advance our project." She stresses "activist ownership" of the process, saying that leadership is about leading, but ownership must be assumed by the membership overall.

At the conclusion of the consultation period, the ideas and views of the membership will be brought back to the Ard Chomhairle.

"This is the conversation we're going to have throughout the country, and at every stage we must be mindful of our own project, of delivering on social and economic issues. We're in a time of transition and it's very important that our activist base have a sense of that, have a view on that and a sense of ownership of it."