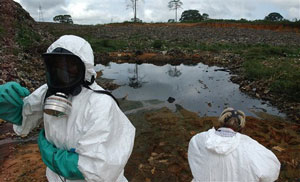 At the beginning of September it was reported that six people had died - four of them children - and a further 1,500 needed medical treatment after a multinational company dumped toxic waste on a rubbish dump in Abidjan, the Ivory Coast capital.

The incident served to illustrate the reality for many states in developing countries, which have literally become "rubbish dumps" for Western economies.

The people of Akouedo make a living from the landfill, selling scraps of metal and even old cloths that they find in the rubbish. What happened on 19 August has made their already difficult and precarious existence even more death-defying. Whatever was dumped this time did not bring any benefit to anyone.

People living near the landfill woke up that morning to a particularly foul smell. During the course of the day, adults, children and the elderly began to feel sick. Vomiting, diarrhoea and breathing difficulties were the main symptoms. Pharmacies ran out of supplies and the World Health Organisation had to send in medicine.

The Government resigned when the first casualties were reported and protests against the administration, which was blamed for allowing the dumping, broke out on the streets.

The cause of the disease was traced to waste dumped at Akouedo and another ten sites around the city - including a water channel leading to a lake, roadsides and open grounds.

The consignment of waste had arrived in a Panamanian-registered ship called the Probo Koala, which had been chartered by Trafigura LTD (a subsidiary of Dutch firm Trafigura Beheer BV).

On 2 July, the Probo Koala had tried to unload waste in Amsterdam but were told that it would be more expensive to dispose of due to the hazardous nature of the cargo. The ship refused to pay extra and so was prevented from unloading. It then left Amsterdam, supposedly to go to Estonia.

Members of the Dutch Parliament and the public prosecutor are questioning why authorities allowed the ship to sail away with a toxic waste in its hold.

A junior minister of the Dutch Ministry of the Environment has told a parliamentary inquiry that he had did not have the legal means to stop the ship leaving the Netherlands. The route of the ship from there to Abidjan, where it arrived on 19 August, remains unclear, though it is believed to have stopped in the Spanish port of Algeciras before sailing alongside Africa's west coast, looking for a port to unload what the company says were 400 tonnes of gasoline, water and caustic washings used to clean oil drums. News agency reports from Abidjan list the noxious chemical hydrogen sulphide and organochlorides among the components.

Trafigura claims that they thought the waste would be "properly treated" in the Ivory Coast, one of the most unstable and impoverished countries in Africa.

Waste is a double-edged sword, particularly for developing countries. Some materials, badly handled, present clear hazards. Others can provide economic opportunities. However, what happened in Ivory Coast raises serious questions about why the Dutch company chose to send it to Africa - a move that may be in breach of international law.

Obviously, citizens in Western states object to waste processing plants on their own soil, but they don't usually think about where that untreated waste goes.

Throughout the 1980s, Africa was Europe's most popular dumping ground, with radioactive waste and toxic chemicals repeatedly foisted on landowners. In 1987 an Italian ship dumped a load of waste on Koko Beach, Nigeria. Workers who came into contact with it suffered from chemical burns and partial paralysis, and began to vomit blood.

By 1998, the European Union had agreed to implement a ban on the export of hazardous wastes to the developing world. But the USA, Canada, Australia and New Zealand refused to sign up.

International waters are still filled with ships looking to unload toxic waste. Western corporations prefer to export garbage rather than paying, or charging consumers, the full cost of clean disposal.

The Basel Convention on the Transboundary Movements of Hazardous Wastes and their Disposal, and its offshoot treaties, are the theoretical barrier to poor countries becoming the world's toxic dustbin. The problem is that parts of the Basel structure remain unratified, a decade after their signature, by countries that see an interest in dumping their waste elsewhere.

This type of waste disposal industry has been retained by developing countries because of its perceived economic benefits. In reality, the only parties who benefit are the exporters.

Now there is a new threat: the dumping of electronic waste, or e-waste - unwanted mobile phones, computers and printers, which contain cadmium, lead, mercury and other poisons. Disposing of e-waste in America and Europe costs money, so many companies sell it to middle merchants, who claim that the computers can be reused in Africa, China and India. Each month about 500 container loads, containing about 400,000 unwanted computers, arrive in Nigeria to be processed. But 75% of units shipped there cannot be resold. So they sit on landfills, and children scrabble over them barefoot, looking for scraps of copper wire or nails. And every so often the plastics are burnt, sending fumes up into the air.

The United Nations Environment Programme estimates that 20 to 50 million tonnes of electronics are discarded worldwide each year. Less than 10% gets recycled and half or more ends up overseas. As Western technology becomes cheaper and the latest machine comes to be regarded as a disposable fashion statement, this dumping will only intensify.

Left-wing politician Rafael Correa and right-wing banana plantation owner Alvaro Noboa were the two most popular candidates in the first round of Ecuador's presidential elections. Noboa, the richest man in Ecuador, won slightly more of the vote than Rafael Correa, an ally of Venezuelan President Hugo Chávez. The second round - in which Ecuador will be electing its eighth leader in a decade - will be held on 26 November.

South Korean Foreign Minister Ban Ki-moon has been formally elected the next United Nations Secretary General in a vote in the General Assembly. The resolution was adopted unanimously. Ban will be succeeding Kofi Annan, who is due to step down on 31 December after heading the UN for two five-year terms. Ban, 62, will be the first Asian to head the UN since Burma's U Thant, who held the post from 1961 to 1971.

Israel's President Moshe Katsav decided not to attend the opening of the Knesset, the Israeli parliament, after police recommended that he face charges for rape and wire-tapping. A number of deputies had threatened to walk out if he attended. Katsav denies claims that he forced two female employees to have sex with him, along with other allegations which police have been investigating. The post of President, to which Katsav was elected for a seven-year term in 2000, is largely ceremonial.

Sweden's Culture Minister became the second Minister to resign over financial irregularities, only days since the new government took office. On Monday, 16 October, Cecilia Stego Chilo admitted that she had not paid her television licence fee for 16 years and had not paid employer taxes when taking on a nanny. Two days earlier, Trade Minister Maria Borelius resigned for similar reasons. The scandal has hit Fredrik Reinfeldt's new centre-right government less than two weeks since it was formed.