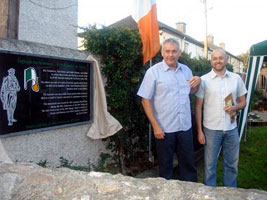 Republicans from Dún Laoghaire and South Dublin accompanied by the Joe McDonnell Flute Band made their way the short distance from Ballybrack village to Maddens Lane for the unveiling of a memorial plaque to two IRA volunteers, Patrick Meaney and Thomas Dunne on.

The Volunteers were tragically killed during an operation to destroy the local RIC barracks on 12 May, 1920.

Speaking at the event local Sinn Féin activist Michael Nolan outlined the background to the events, how the two volunteers, originally from Wicklow and Carlow, were fatally injured in what appeared to be a premature explosion that destroyed the barracks.

Former O/C of IRA prisoners in Long Kesh during the 1981 Hunger Strike, Brendan McFarlane, unveiled a polished black granite memorial on what would have been the grounds of the old barracks at the junction of Maddens Lane and the Wyattville Road. The memorial is also dedicated to the men and women of 1916 and the 1981 Hunger Strikers.

McFarlane drew attention to the date of the attack, which he said coincided with the death on Hunger Strike of Francis Hughes in 1981. He also referred to the fact that there was a mass hungerstrike by Irish republicans taking place in Wormwood Scrubs in England at the time of the Ballybrack attack. He said these parallels could not be ignored and that the cause for which Meaney and Dunne paid the ultimate sacrifice was the same one that claimed the lives of the 1981 Hunger Strikers.

He finished by appealing to people to become politically active and paraphrasing Bobby Sands to play a part, big or small, in bringing about a 32 County Republic.

The short ceremony concluded with local musician Willie Byrne singing the Foggy Dew and Come out ye Black and Tans while Miriam Murphy laid a wreath on behalf of Dún Laoghaire Sinn Féin.

The unveiling was also used to launch a full colour commemorative brochure detailing the account of the attack on Ballybrack RIC barracks which also unfolds to reveal an A3 map of historical sites of republican interest in Dún Laoghaire. This quality print souvenir is available to order at €2 a copy from Michael Nolan at [email protected]