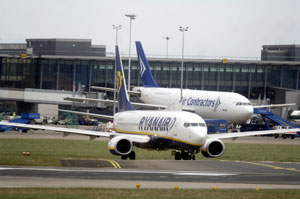 On Monday, IMPACT lodged a pay claim for Ryanair pilots with the Labour Relations Commission (LRC). The union is seeking a closer alignment in wages with higher-paid Aer Lingus pilots.

The notoriously anti-union company is expected to reject any LRC intervention and the claim will then be referred to the Labour Court, which is currently considering an IMPACT claim against Ryanair under the Industrial Relations (Amendment) Act 2004.

The lodging of the complaint with the LRC follows Ryanair's rejection of the pay claim last month, despite announcing at the start of August that it had increased net profits by 80% for the first financial quarter of 2006, to €116 million.

In October 2005, the High Court rejected Ryanair's claim that the Labour Court did not have jurisdiction under the 2004 Act, which allows the Labour Court to set pay and conditions in companies that don't engage in collective bargaining. The company has appealed to the Supreme Court, which is expected to make a ruling shortly.

Ryanair recently lost a separate High Court case against IMPACT members whom it had accused of 'bullying' other staff. The Court ruled that the only evidence of bullying was by Ryanair itself and awarded costs of €1 million against the company. Dismissing Ryanair's application, the judge said that evidence given by a senior Ryanair manager was 'baseless and false.' Ryanair could incur even higher costs if it loses its current Supreme Court appeal.

A fascinating insight into the events of Easter Week 1916 - in the form of six witness statements from ordinary people who participated in them - is contained in a new publication by SIPTU to mark the 90th anniversary of the 1916 Rising.

Six 'witness statements' held by the Bureau of Military History were made available for publication through the National Archives of Ireland. Three are written by the men who printed the Proclamation in the basement of the old Liberty Hall: Christy Brady, Liam O'Brien and Michael Molloy.

One was made by Irish Citizen Army bugler William Oman, who sounded the 'fall-in' as Connolly and others left Liberty Hall to make history. One was made by Rosie Hackett, an iconic and much-loved figure neglected in most histories of the Rising. The sixth was by Thomas Mallin, brother of Citizens' Army leader Michael Mallin.

The pamphlet, entitled James Connolly, Liberty Hall and the 1916 Rising, also reproduces in full the transcript of the court-martial of Constance Markiewicz, who was closely associated with the ITGWU and ICA in the crucible years of 1913-1916. There are also two short essays dealing with the role of the ITGWU and Liberty Hall in the Rising.

"The pamphlet also draws together a number of important, previously unpublished documents to bring SIPTU members' minds back to Connolly's legacy and what he would have us do: to defend and protect that which is under threat and that which remains to be achieved," explained SIPTU General Secretary Joe O'Flynn.

The pamphlet, which has been published in association with the Irish Labour History Society, was co-written by SIPTU tutor and labour historian Francis Devine, and Manus O'Riordan, head of the union's Research Department.

Members of the Irish Nurses Organisation at Bon Secours Hospital, Cork, are currently balloting for industrial action in an attempt to get management to address concerns regarding their employment position post closure of maternity services.

A decision was taken in November 2005 to discontinue obstetric services within the hospital from 1March 2007. The Bon Secours Organisation has said that the midwives employed by them should either stay at the hospital and work in the general setting or seek employment in the new public Unified Maternity Services, to open soon in Cork University Hospital.

The INO have consistently argued that the workers are being made redundant and therefore are entitled to a redundancy package if they do not wish to move to another setting within the hospital.