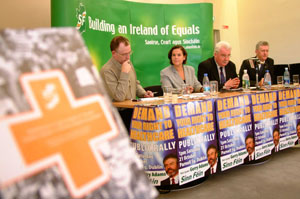 Dublin Sinn Féin MEP Mary Lou McDonald has called on Dubliners to come out in support of a major health rally planned for Dublin on 21 October. Speaking at a press conference in Darndale on Dublin's northside on Tuesday, McDonald said that Dublin people should come out on the streets in huge numbers to demand our healthcare rights.

She said: "Sinn Féin is demanding a properly-funded health system as a public service that provides care for all, on the basis of need alone and funded by our taxes. Healthcare provision should not be based on ability to pay.

"As part of our health campaign, we have brought our policy proposals around the country and discussed them with a range of healthcare groups and professionals working in the industry, and I am delighted with the overwhelmingly positive reaction we have had.

"Over the next couple of weeks, Dublin Sinn Féin activists will be out each and every night distributing leaflets and putting up posters, encouraging Dublin people to come out and demand our healthcare rights. We will be distributing 130,000 copies of our newspaper, Dublin News, along with 60,000 leaflets and we will be putting up 2,000 posters throughout the city highlighting the rally.

"I am calling on Dublin people to come out in huge numbers to show the Government the widespread dissatisfaction there is with the poor state of our health service. Our health service can be better. Sinn Féin is proposing a viable, realistic alternative approach which can end the current inefficient and unequal two-tier health system."