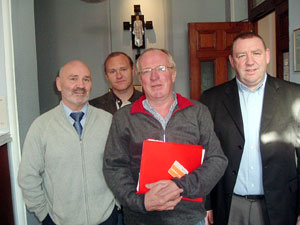 Western powers should take their armies out and leave the people of the Middle East alone. That was the message British war correspondent Robert Fisk brought to West Belfast last week.

Throughout history, said Fisk, western governments have portrayed themselves as 'liberators' justifying their interference in the Middle East by claiming to bring democracy and freedom while arriving with tanks and guns. "War represents the total failure of the human spirit. It is simply about death," said Fisk.

"When the British invaded Iraq in 1917 they proclaimed, "we come not as conquerors but as liberators". The Arab world would like freedom but what is needed most is freedom from us and that's the one thing we won't give them," said Fisk.

The history of foreign interference in Iraq had been one of "torture, pain and betrayal", Fisk told his audience. The kind of justifications used during the British occupation of Iraq in the early 20th century and the American and British led occupation of today are strikingly similar.

The forces of occupation initially argued they couldn't leave because of the threat of civil war, later they cited a 'terrorist' threat from Syria. "If Iraq's only commodity had been asparagus Britain and the US would not be there," said Fisk. Oil is a key factor in western interference in the Middle East.

The internationally renowned journalist and author braved jetlag and a high temperature to discuss the Middle East at a gathering of A level students and their teachers at Clonard Monastery on the Falls Road. The Questions and Answers session was held just hours before Fisk delivered a lecture at Belfast's Waterfront before travelling to Dublin.

Robert Fisk is one of the few western journalists to have met Osama bin Laden. In his latest book The Great War for Civilisation Fisk describes three meetings with bin Laden all prior to the al Qaeda attacks of 9/11.

Fisk traced the development of bin Laden's preoccupations from the early 1990's when he was fighting Russian occupation in Afghanistan with the help of the CIA, through challenging "corruption" amongst the ruling elites of the Middle East towards internationalisation of Muslim-based resistance.

If the USA and Britain want to know what al Qaeda thinks they only have to ask Robert Fisk, bin Laden had announced during a recent statement. But Fisk argues bin Laden is no longer relevant.

"It would be like pursuing the scientist who invented nuclear weapons after the technology was already out there. The nature of the conflict has already changed. Now if our governments send their armies abroad we're not going to be safe. We live in a very unsafe world and there are strong forces out there working to divide us," said Fisk.

Describing the moment he first heard of the Twin Towers attack, Fisk said he had been a passenger in a plane diverted in the immediate aftermath. As the news began to filter through Fisk felt himself being drawn towards identifying fellow passengers as possible Muslim fundamentalists.

Describing an "iron curtain of western weaponry" which stretches throughout the Middle East and beyond with military bases in many former USSR territories, Fisk said he didn't fully understand why but was fearful of the consequences of such a developing international configuration.