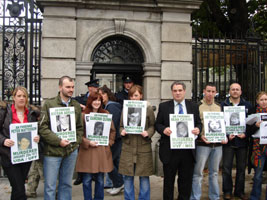 Dublin Sinn Féin protested at Leinster House on Wednesday to highlight the impact a new Tribunal of Inquiry Bill will have on victims of collusion and their families in their quest for truth.

Aengus Ó Snodaigh TD called for a commitment from Justice Minister Michael McDowell to amend the Tribunal of Inquiry Bill to ensure that it will not jeopardise inquiries into acts of collusion such as the Dublin/Monaghan bombings and the murder of Cllr. Eddie Fullerton, among many others. Ó Snodaigh said he has written to the Tánaiste to outline his concerns and Sinn Féin President Gerry Adams also raised these concerns with the Taoiseach when he met him on Monday.

"The Government approved an all party motion backing a demand for a full inquiry by the British authorities into the murder of Pat Finucane. This Bill would greatly undermine that demand. Likewise it would jeopardise future inquiries into travesties such as the Dublin Monaghan bombings and others in this state. I am calling for a commitment from Michael McDowell to amend this Bill to ensure that it will not jeopardise the quest for truth by the families of collusion victims", Ó Snodaigh said.