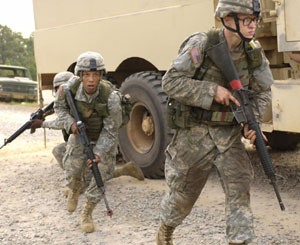 On Sunday, 24 September, the New York Times and Washington Post published articles based on the leak of a classified intelligence report entitled Trends in Global Terrorism: Implications for the United States and which was produced by 16 US intelligence agencies highlighting how the war in Iraq "was cultivating supporters for the global jihadist movement".

The intelligence report, completed in April of this year but still classified, contradicts more optimistic assessments by both The White House and the House Intelligence Committee, which have claimed that the US and its allies are safer since the September 11 attacks.

As a result of the leak, US President George W Bush ordered parts of the document to be declassified on Tuesday 26 September. Mid-term congressional elections take place on 7 November. With opinion polls showing President Bush's party possibly losing control of both houses of Congress in the the mid-term polls, in large part due to unhappiness over the war in Iraq, the report will make for painful reading at the White House.

However, while the US President argued that the leak misrepresented the content of the report, the opponents to the war on Iraq pointed out that the declassified sections - little more than three pages out of a total of 30 - reinforced the message initially presented in the newspapers articles.

One of those who feels vindicated by the report is Camilo E. Mejia, a former Amnesty International prisoner of conscience, who served nine months in a U.S. Army jail for refusing to return to his Florida Guard Unit in Iraq. Mejia is one of the Veterans against War who decided not only not to come back from Iraq after his first tour of duty there, but also to speak out about the reasons why the war in Iraq is wrong. In an article published on website CommonDreams.org just after the leaks, Mejia came back to a press conference he held on 15 March 2004:

"A reporter from Univision asked me if there was a difference between what was being reported in the US about soldiers in Iraq and my experience there. I told her that morale amongst US troops, contrary to media reports, was really low because we lacked a sense of mission and because "we were all lied to about weapons of mass destruction and connections between Iraq and terrorism to justify the war. In reality, we're giving terrorism a reason to exist with this war."

Now, two and a half years after Mejias' assessment, opposition politicians are using the same argument. According to Senator Edward Kennedy: "This intelligence document should put the final nail in the coffin for President Bush's phony argument about the Iraq war".

He went on: "The fact that we need a new direction in Iraq to really win the war on terror and make Americans safer could not be clearer or more urgent - yet this administration stubbornly clings to a failed 'stay-the-course' strategy," he said.

One of the declassified sections shows how the intelligence agencies have all agreed that "the Iraqi jihad is shaping a new generation of terrorist leaders and operatives; perceived jihadist success there would inspire more fighters to continue the struggle elsewhere".

"The Iraq conflict has become the 'cause celebre' for jihadists, breeding a deep resentment of US involvement in the Muslim world and cultivating supporters for the global jihadist movement. Should jihadists leaving Iraq perceive themselves, and be perceived, to have failed, we judge fewer fighters will be inspired to carry on the fight.''

Although the report stated that US efforts have damaged the leadership of al Qaeda, it also pointed out that these were failing to use the fact that most Muslims abhor its philosophy as a way to fight the organisation. Instead, US mechanisms seem to have helped diffuse the movement, which "is spreading and adapting to counter-terrorism efforts".

Meanwhile, by 23 September, the death toll of US army personal in Iraq and Afghanistan has matched that of 9/11. Add casualties from chasing terrorists elsewhere in the world, and the total has passed the 11 September figure.

The Pentagon reported on the night of Friday 22 September that the latest death from Iraq, an as-yet unidentified soldier killed a day earlier after his vehicle, was hit by a roadside bombing in eastern Baghdad. This brought the U.S. death toll in Iraq to 2,695. This meant that, combined with 278 US deaths in and around Afghanistan, the 9/11 toll was reached.

However, while the American public and the US army are among the losers in the 'war on terror', along with the populations of Iraq and Afghanistan, and civil liberties worldwide - some are benefiting from the conflict. Halliburtonwatch has reported that Halliburton, the company that spent $4.6 million since 2000, buying influence in Washington via campaign donations and lobbying, has seen this investment paying off, as the company's government contracts increased by 600% in value by the end of last year, mostly because of the war in Iraq.

Halliburtonwatch says Haliburton's board of directors and their spouses personally gave $828,701 to candidates for Congress and the presidency while Halliburton's political action committees gave $1.2 million, most of it donated to Republicans and political organizations with strong Republican ties. The company spent an additional $2.6 million lobbying members of Congress, the White House and federal agencies. Current US Vice-President, Dick Cheney, served as CEO of the company from 1995 to 2000

North Korea claimed this week to have carried out its first successful underground nuclear weapons test, making it the world's ninth nuclear-weapons armed state and leading to widespread international condemnation.

The decision to test the atomic weapon flies in the face of warnings from the UN Security Council and may lead to fresh economic sanctions against an already desperately poor state.

Pyonyang's actions suggest that the hardline US foreign policy towards it has utterly failed. The 'Agreed Framework' negotiated by the Clinton administration which saw North Korea receive vital supplies of food and oil in exchange for in return for suspending its nuclear ambitions had been binned by Bush.

Hundreds of people gathered in Moscow on Saturday, 7 October to pay tribute to prominent journalist Anna Politkovskaya. Many described the murder as politically-motivated. Politkovskaya was a fierce critic of the Kremlin's actions in Chechnya and was due to publish an article on torture and kidnappings in Chechnya.

The International federation of Journalists said the killing reflected a state of lawlessness that threatened to overwhelm Russian journalism.

Chad has settled a dispute with two foreign oil companies after they agreed to pay the country more than $280m in overdue taxes. The agreement came two months after President Idriss Deby threatened to expel Malaysian-run Petronas and US firm Chevron, because they owed more than $500m on unpaid tax to the state.

Thousands gathered in Buenos Aires on 7 October to demand the return of a witness in a landmark human rights trial. The demonstration took place three weeks after Jorge Julio Lopez disappeared after testifying in the trial of a former police chief, Miguel Etchecolatz, who was later sentenced to life in prison for rights abuses committed during Argentina's military government between 1976 and 1983.

It is feared Lopez may have been kidnapped or killed.