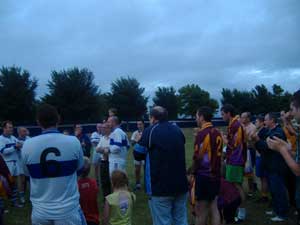 The reaction of Armagh supporters in the second half of their quarter final against Kerry last week put me in mind of Dublin supporters during the 2000 Leinster final replay against Kildare. When the same half time euphoria was quickly replaced by a deathly silence.

2000 was worse, for me anyway!, but also for the scale of the reversal. Dublin were leading by six points when I went off to calculate the scale of my winnings. For once I was not in any particular rush to get back to the action, being more preoccupied with debating where to go for a pint or nine afterwards.

Anyway, as I ambled back up the steps into the sunshine it did strike me that everything was a bit quiet. Perhaps the teams had not come back onto the pitch. But they had and what was more alarming there appeared to be a lot of noise coming from the ad for a well known washing up powder that is a stand full of Kildare supporters.

My brother Gerard was standing with his hand over his mouth, a gesture he normally reserves for when it is his turn to shout a pint, and when I asked him what was going on he gestured silently in the direction of the far scoreboard in the manner of the Ghost of Christmas Future gesturing towards the gravestone of Ebeneezer Scrooge. It was the headstone of the great Dublin team of the 1990s and it told of Kildare having scored two goals in the first 90 seconds of the second half.

But enough of such traumatic memories. As I say, the scale of Armagh's reversal was not as big in terms of scores but it did have the same psychological impact, and may well have a similar impact on the current team. As someone else has astutely pointed out, Armagh may have made too much publicly of their need to win a second All Ireland to validate themselves in the eyes of football history.

Their record of six Ulsters and one All Ireland since 1999 speaks for itself. In Ulster in terms of consistency and achievement they rank with the Down teams of the 1960s and early 1990s. Indeed, given the greater competitiveness of recent years, they arguably lie second only to the first of these. And before anyone starts to shout about Tyrone, I only exclude them because their race may not yet be run.

That may sound as if I am assuming that Armagh's is. No-one knows that but I would not be surprised if there are radical changes. Joe Kernan's year has revolved around two huge targets: Armagh winning the All Ireland and Crossmaglen winning an 11th County Championship and getting another chance to win the All Ireland club title. Several of Armagh's key players share that vision. The second is still alive. No doubt, Joe and the boys will reflect later on in the year on the fate of that project before they decide whether or not to stay on.

Of course the real story of last Sunday was about Kerry. Much speculation revolved around whether the playing of Donaghy at full forward would unsettle the Armagh defence. At half time the verdict was unequivocally in favour of Francie on points with a technical knock-out predicted if, as expected, Jack O'Connor moved the towering Austin Stack's man out the field.

Instead he had one of those Bomber moments from 1978 when Liston's goal in the first minute of the second half began a Kerry rout in what at one stage in the first half had had all the appearance of becoming an easy Dublin victory. In the first Kerry attack of the second period Donaghy fielded a high ball from Sean O'Sullivan, Francie slipped, and he put the ball past Paul Hearty.

The old cliché that goals decide matches was never more confirmed. And like Dublin in 2000, Armagh's growing lack of confidence on the field was confirmed by the silence among their supporters. Ernest Hemingway once wrote something about big beasts having big deaths. Armagh had a big death. r Cork, it is another step on the way to confirming their greatness, no matter what happens on September 3. For Waterford there is only the pain of being on the losing side of one of the greatest hurling matches of all time