They continue to light the way 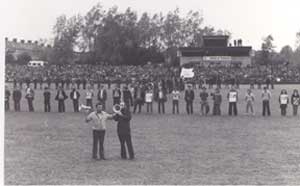 We never really knew him. We never had the honour of meeting him. But for the many hundreds of people throughout Cavan and Monaghan who campaigned for his election in those strained and stressful months of May and June 1981 we felt then and ever since that he was that brother of whom we were most proud.

His actions and the stance that he and his comrades took over the months of March through September 1981, and that of others of their number in Long Kesh and the women in Armagh Jail in the preceding year, left an indelible mark on all our lives and changed the course of life for many. Without question they also helped shape the course of contemporary Irish history.

A quarter of a century after the death of Kieran Doherty his legacy and the legacy of those who stood with him in direct defiance of the savagery of the British state and its efforts to criminalise and defeat the Republican struggle, continues to light the way to our shared goal of a united and sovereign Ireland, an Ireland whose citizens of all past allegiances will live in the celebration of a new pluralist and egalitarian society.

The General Election of June 11th 1981 presented the opportunity to not only emulate the achievement of those in neighbouring Fermanagh and South Tyrone who elected Bobby Sands but, most importantly, of impacting as never before on the conscience of the political establishment in the 26 Counties. All too sadly, and with but one or two exceptions, the political establishment closed its eyes and ears.

Very few of those who came together to form the Co. Monaghan H-Block and Armagh Committee had previous electoral experience, fewer still of other than local election contests. But once the decision to contest was taken it was morning, noon and night until the polling stations closed on Election Day. Postering, leafleting, canvassing, public meetings, after-Mass addresses, protests here and there. What we lacked in experience and expertise we made up for with energy and enthusiasm. And it was infectious.

9,121 electors made Kieran Doherty, a 25 year old from Andersonstown, Belfast, who had never been to Cavan or Monaghan in his lifetime, their Number One choice on the ballot paper. The euphoria and sense of achievement was palpable. The great joy for many was to witness the rekindled hope in the faces of Kieran's anxious mother and father, Margaret and Alfie.

Sadly that renewed hope was all too soon to fade. Difficult weeks followed and despite the unfaltering efforts of campaigners throughout Ireland and internationally, Kieran Doherty's young life ended after 73 days on hunger strike on 2nd August 1981. He joined his comrades Bobby Sands MP, Francis Hughes, Raymond McCreesh, Patsy O'Hara, Joe McDonnell, Martin Hurson and Kevin Lynch, who died the day before. They would be followed by Thomas McElwee and Mickey Devine.

We never really knew him. We never had the honour of meeting him. But we understood.

The admiration and affection of the republican people of Cavan and Monaghan for Kieran's courageous parents Margaret and Alfie is both special and enduring. The dignity of Kieran's loving and grieving parents is an abiding memory for all who were witness to those days.