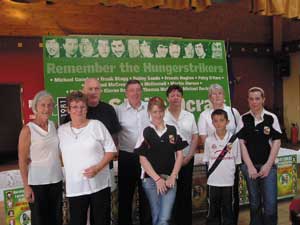 from the day Martin went to jail my father never said he was wrong or he was right, which was surprising really. He just went along with the rest of us. He never passed any remarks, never criticised

"Religion was very important to him. He would have had all the regalia, books, medals and the like. I had given him a rosary beads in Crumlin Road after he was charged and my wife Sheila gave him a medal of St Martin and funny enough these two things were left out in a special envelope when he died. My wife to this day wears that medal and if any of the children are sick she'd get that medal to them."

Brendan has eight children and they know all about Martins' story. "They can remember visiting the prison when they were very young. Martin stood [as godfather] for the oldest girl Brenda."

Was there was something special or different about Martin that made him able to go through the Hunger Strike? Bthat whole issue all those years ag

Each family had to make their own decisions. "He said at one time that if any of us came into the prison to take him off, they weren't welcome."

The Hursons chose to stand by Martin's decision.