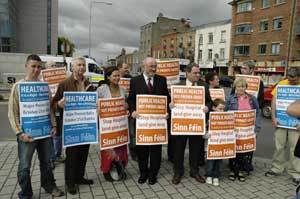 Sinn Féin Dáil leader and spokesperson on Health and Children Caoimhghín Ó Caoláin TD has called on the Fianna Fáil/Progressive Democrat government to scrap plans to allocate land at public hospital sites to the developers of private hospitals.

Speaking today on Wednesday at a protest outside St. James's Hospital in Dublin, one of the 11 sites for private hospitals at which Sinn Féin is protesting, Mr. Ó Caoláin said the Harney plan was "ill-conceived, unfair, inefficient and doomed to failure." He called for all government health spending to be used in the public system with equal access for all