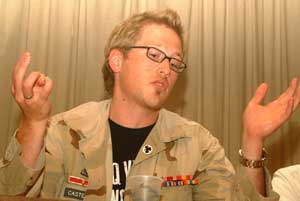 Joshua Casteel served in the United States Army as an army interrogator for eight years between 2002 and 2005. He worked in the infamous Iraqi prison of Abu Ghraib from June 2004 to January 2005. His experiences in Iraq convinced him that he could not longer participate in the war, and he applied for conscientious objector status in December 2005, receiving an Honorable Discharge from the US Army last May. Casteel recently spoke to An Phoblacht. Here we carry the first in a two-part featrure interview with him.

An Phoblacht: The image many people have of the profile of a typical US soldier is Latin or African American from deproived backgrounds. Why did you decide to join the US army?

Joshua Casteel: Well, the army is a microcosm of the rest of the country, and the US has a quite diverse population. Increasingly, there has been an efforts by the US military to recruit poor people. The No Child Left Behind Act gives full demographic information to the Department of Defence. If schools receive government funding they have to provide full information to the Defence Department, including family income, marital status, grades, racial background... that basically means that the recruiter knows who is likely to go to college or not... and if you go to places like South San Antonio, East Los Angeles, where people with poorer backgrounds live - mostly African American or Hispanic, the recruiter comes back to these locations to recruit them.

I personally come from the Mid-West which is traditionally in favour of the military, as is much of the rural south. So, you'll find plenty of people like me in the military as well.

How did you end up in Iraq?

I entered the US military at the age of 17. I come from a very conservative and nationalistic Christian household in the mid-West, Iowa. My grandfather fought in the Second World War, Korea and Vietnam. My Dad was an army captain and my aunt served in the military also. It was a honour for me to go on and pursue a vocation in the military, according to my culture, my context.

I had ambitions of going to the US Military Academy in West Point. I did quite well in the school, in sports... So I enlisted at a very young age to increase my chances of getting into the Academy and it worked very well for me. I went on the Academy and my first year as a cadet in West Point began a very long process. I spent a few years in reserve status as I finished university. I left West Point prematurely, mostly for personal reasons. At the time it had not crystallised into ethical convictions - I was 18 years old - and while on reserve duty I had a unique opportunity to be able to go to school while I was actually in the military and I kind of went on in a kind of upper middle class, white, relatively privileged university existence. And then, all of a sudden 9/11 happened and my comrades were getting sent off overseas and the scandal over George Bush's army record had come up and I thought to myself that although not very sure what a war on terror is - it is not like fighting a conventional war - I questioned myself whether I was going to hide in the garden, like the President, or face up to my duties. I was quite angry at what the President had done and I did not want to be like him.

How were conditions in Abu Ghraib?

In Abu Ghraib mortar attacks were often going on up to four timesa week. On those situations I was sleeping in concrete shelters, in the cells of the old prison while the prisoners, who were in their thousands, were sleeping in camps, in the middle of the squares within the prison. While we had concrete shelters to protect us from incoming fire, they had only canvas. To my knowledge, no more than five coalition soldiers have ever died in Abu Ghraib and there have been plenty of times when as many as 45 Iraqi prisoners have been killed during the course of the day.

I was deployed to the Middle-East about 45 days after I graduated from the Arabic School and the very first place where I landed was Abu Ghraib, and the scandal had already broken in the US media, so I somewhat knew what I was getting into.

There is a lot of conflicting emotion and opinion back in the US. The execution of Nick Berg [Berg's killers mentioned the prisoner abuse in a taped statement they made just prior to beheading him and his father held Secretary of Defense Donald Rumsfeld responsible for his death and called for his resignation] had just happened and there was a lot of pain and frustration and uneasiness about how to deal with it.

You were an interrogator. There has been much comment about how innocent people are being imprisoned for weeks, months and even years. How did you feel about it?

The first month for any soldier coming into a combat zone is very much filled with naivety. Interrogators go into their job believing that their training is really going to matter. They believe that detainees are going to respond to logic, that all the techniques and games that you have been taught to play and win are going to matter on the ground.

But then you enter into the interrogation room and find yourself staring across the table at 14 years-old boys, young fathers, local labourers, veterans of previous Iraqi wars, some of whom are missing limbs... We had quotas we had to meet on a weekly basis. Intelligence quotas. General Miller would come in and we were ordered to write 10 reports per week. That meant we had to interrogate two people per day and acquired enough actionable intelligence, as it is called, to write a report about it.

Ninety to 95% of the people I interrogated were innocent of any wrongdoing. I can count with one hand the number of people that I interrogated that I believe were part of some form of systematic violence, and I had over 130 combat interrogations.

Iraq is a place of absolute disarray. The role of sectarian violence is quite extreme. When the coalition forces decide to send people to patrol a town, lets say Fallujah, with a Sunni majority, they will send Shia and Kurd soldiers, a great way to create division. When we were going into villages to arrest individuals, we used to cast a wide net. Let's say we want to arrest four people. We will go into the village and arrest 80 people over the age of 43 in order to find those four people we wanted. Then, there is the screening process to find the four. I found I would spend most of my time, like my colleagues, interrogating ordinary people.

NEXT WEEK: "Kick the US military out of Shannon."