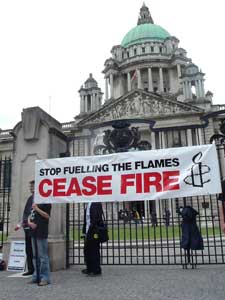 Speaking on Wednesday, 9 August as the UN Security Council members continued their deliberations on the Israeli conflict, Sinn Féin International Affairs spokesperson Aengus Ó Snodaigh described the comments of the Israeli representative to the UN as 'perverse'. He went on to call for a resolution to the conflict 'based on peace and fairness, rather than Israeli lies and hypocrisy'.

The Dublin South Central TD said: "The comments of the Israeli representative to the UN last night were perverse. The UN Security Council must cease its tradition of pandering to hawkish Israeli spin doctors and instead look to the realities on the ground. Look to the scale of destruction in Lebanon and Palestine inflicted by Israel now and over three decades of violence. Deceptive and hypocritical attempts by the Israeli regime to portray itself as the victim, while slaughtering hundreds of civilians in Lebanon, are nothing short of obscene.

"Small nations such as Ireland have a history in common with Lebanon and Palestine. We share histories of occupation, emigration and interference by a powerful neighbour. Nations such as ourselves must take the lead in the UN. The Government must use whatever influence it has over Security Council members to argue for a resolution on the side of justice, a resolution that meets all the demands of Lebanon and Palestine, a resolution based on peace and fairness, rather than Israeli lies and hypocrisy