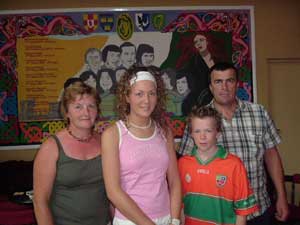 Thomas McElwee's brother Joe talks to An Phoblacht's ELLA O'DYWER about his recollections of Thomas as a brother and a republican and the impact of the 1981 Hunger Strike on a younger generation.

Thomas McElwee from Bellaghy, County Derry was the sixth oldest in a family of eight girls and four boys. Cars were the young Thomas's passion and he wanted to be a mechanic. His brother Joe recalled how "he loved cars and fixing them, taking them apart and building them up again. Sadly he never got to spend his life working with cars". Joe recounted the local garage man's recollection of Thomas in his late teens sitting in the corner of his garage on winter nights. "He'd be sitting twiddling his thumbs, wondering what to be at. He was always thinking; always had something on his mind."

He was a born mechanic Joe recalled: "There was no such thing as bin lorries in those days. Everyone had their dump and Thomas would go round looking for bicycle or pram wheels to make up carts or the like."

Asked what he thought got his brother involved in republicanism Joe says:

"I think what triggered Thomas off was the abuse that the nationalist people were getting in the area. As he got older he started to see that this kind of abuse was going on in other parts of Ireland. It wasn't just happening on the doorstep, it was happening all over." Asked if he was surprised to learn eventually of Thomas's involvement, Joe says:

"It came as quite a shock at the time. Everything was very secretive. Then, I found out he was arrested when I came home and found the yard full of cars."

Thomas and another brother Benedict were injured in a premature explosion and Thomas lost an eye. The family had all gathered around to hear news of the two men.

At 23 Thomas was the youngest of the Hunger Strikers to die. Both Thomas and his brother Benedict volunteered for the 1980 and '81 hunger strikes. Asked if he had tried to dissuade Thomas from going on the fast Joe says no. "He was a mature adult, he had his own mind, he knew exactly what he was doing.

"There's a lot of the prisoners, I think, who find it very, very hard to talk about that time because the gravity of the abuse they got in there was fierce. There was no measure left but hunger strike, to get the world to sit up and take heed."

Both of Thomas's parents were alive when he died and Joe believes that it was his mother's faith that got her through that period. She had already lost four children before Thomas died. Thomas too was religious. "Thomas was very, very religious. His scapulars and rosary beads were handed back after he died."

Did Joe get to see Thomas before he died?

" I got in to see him when he was 42 days on hunger strike and my memories of Thomas before he died were of my grandfather in his nineties. Thomas was holding his head up with his arm in the bed telling me to keep my chin up. Those were his last words to me. I was only 20 at the time of the Hunger Strike and even though Thomas had been locked up for four years, he had more outlook on life and he seemed to feel for me."

On the church's attitude to the Hunger Strike Joe said: "With the religious following they had, they could have given us a lot more help". On Fr. Denis Faul's interventions he said "Fr Faul was putting his nose in where it wasn't wanted. He wasn't invited." He expressed the view that they might have been afraid of losing their grip on the community. "They might have feared that they would no longer be the rulers as they had been over the years and now after 25 years you see why. With the outbreak of scandals and all that, they couldn't speak out. Now you see why. The Brits had them under their thumb because they would have blown the whistle on them."

Of Thomas's character he recalled how Thomas would sing all the time. "He loved country and western, especially Philomena Begley. He loved the dances. But they didn't get peace to go to the dances at the time. They'd be stopped and get a kicking on the way."

Asked if she felt the family had coped with Thomas's death, Joe's wife Eileen felt people never really got over things like that. "They would try to block it out. They didn't really talk about if for a long time."

Joe confirmed that it is still hard. "Around times like this, the commemoration, it's hard. To see men about Thomas's age getting on with their lives with their wives and families - the things he would have desired, you wonder what would have become of Thomas. But it was Thomas's decision to go on hunger strike and today I'm very, very proud to say I've a brother who was a Hunger Striker. How many men throughout the world can say they have a brother like that?"

Joe went on to talk about their cousin Volunteer Francis Hughes who died on hunger strike before Thomas. "We're talking a lot here about Thomas", he said. "Francis Hughes was every bit of a brother to me as Thomas was." Referring to the Brits' hatred of Francis Hughes he said: " I couldn't see how Francis could survive when they wanted him dead so much. I knew when they let Bobby die, Francis would die too."

Joe went on to describe the friendship between Francis and Thomas "They were mad about fast cars, they'd have the cars around today". He recounted how Francis had given him his first cigarette. "When I was seven years of age I got my first puff of a Benson and Hedges from Francis and we were born buddies then forever.

"At the end of the day the 10 men had the last say. They got their demands along with all the other men in the Blocks. They got exactly what they fought for. I know it didn't happen right away, it took time. Likewise this peace process is going to take time as well."

Joe McElwee commented on the impact the anniversary is having on young people and pointed across to his young son Leo. "I see the impact on young people like Leo there whose only 14. He's very interested. He's downloading republican stuff steadily on the computer. There's almost not enough stuff on the computer for him." At this the boy demonstrated the screen saver on his mobile phone which read 'Tiocfaidh Ár Lá.'

Joe's oldest son Thomas is called after his uncle and the family showed a photo of the young man who is the image of his uncle. Like so many other relatives of the 10 men who died in 1981, there are daily reminders for the McElwees. Joe's daughter Aileen had the last word. When asked what she had learned from her uncle Thomas's life she said "to stand up for yourself"