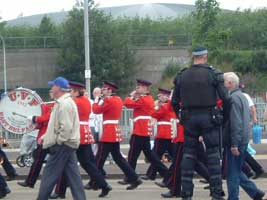 The ugly face of Orangeism

The depths of sectarian hatred that underpin the annual Orange Twelfth of July activities was exposed in full when Orange supporters in Ahoghill, County Antrim placed a Tricolour mocking Ballymena teenager and sectarian murder victim Michael McIlveen on a bonfire.

In a sickening display, not untypical at Orange bonfires, the flag with the words, 'Fuck Mickey Bo', was hoisted on the Ahoghill fire.

According to Sinn Féin' s North Antrim MLA Philip McGuigan other loyalist bonfires in Ballymena also carried mocking references to the local teenager who was murdered in May.

Digney revealed that Gillespie was seen helping to build the Ahoghill fire, "and didn't lift a finger to get the flag, referring to Michael McIlveen, removed".

In a further provocative display, a fire in Belfast's Shankill Road was adorned with black flags bearing the names of the 1981 Hunger Strikers.

Tension throughout the North has heightened in the run up to the loyalist Twelfth Orange marches with nationalists coming under attack from PSNI members and unionist gangs.

Houses in the Beechfield Street and Clandeboye area of Belfast's Short Strand have come under stoning attacks from gangs in loyalist Cluan Place.

On the Twelfth morning a nine-year-old child was targeted by loyalists who threw a paint bomb at him, splattering him with paint, as he walked along the Whitewell Road. Earlier a 24-year-old nationalist was beaten by drunken loyalists in the same area.

And in Lurgan, County Armagh a Sinn Féin councillor, Michael Tallon, was attacked by a PSNI member who sprayed CS Spray directly into his face. Tallon had gone to the town centre, to calm a situation created when the PSNI arrested three nationalist youths who they accused of pulling down illegally erected loyalist bunting, when the incident occurred.

And with fears of trouble in North Belfast due to the Parades Commission's determination allowing an Orange Parade to pass through Ardoyne, Sinn Féin President Gerry Adams has called for calm. "I would once again appeal to people over the coming days, in spite of provocation and in spite of the continuing insistence of the Orange Order to march in areas where they are clearly not welcome, to remain calm.

"As in previous years republicans will do all in their power to ensure that the coming days pass off peacefully. But this is not the sole responsibility of republicans.

"The British government and the PSNI have a big responsibility. The Orange Order, unionist political leaders must play their part in ensuring that the violence traditionally associated with the Twelfth parades is averted."

Meanwhile residents of the Short Strand area in East Belfast have complained to the Parades Commission over the behaviour of loyalist bands as the East Belfast Orange Lodges marched along the Newtownards Road to join the main Belfast parades on the Twelfth morning.

Numerous bands, with clear affiliations to loyalist death squads, marched along the road past the nationalist enclave with UVF and YCV flags on display.

Speaking to An Phoblacht a spokesperson for the residents group accused the Orange Order of, "endorsing the activities of loyalist killer gangs by making bands supporting the UVF, UDA and the Red Hand Commando an integral part of their parades".

During the parade, which passed the Short Strand at 9.30am, loyalist hangers on who were clearly drunk shouted sectarian abuse at local people who staged a quiet and dignified protest against the parade.