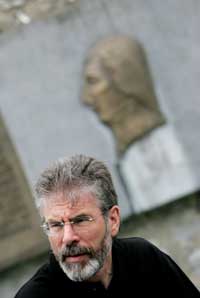 Against a backdrop of controversy this week following a report by the Six County Police Ombudsman into the circumstances of the death of Jean McConville and a subsequent IRA statement outlining its position on the issue, further details emerged about ongoing republican efforts to locate and retrieve the remains of a number of missing people, killed by the IRA during the recent armed conflict.

It has been revealed that the IRA has conducted a series of 'on site' meetings with a forensic expert tasked with assessing the best way forward.

Following representations by Sinn Féin President Gerry Adams, in 1997 the IRA established a special unit to investigate alleged IRA involvement in a number of killings. In 1999 the IRA publicly acknowledged their responsibility for the killing and secret burial of nine people.

Initial attempts to accurately locate the remains were made difficult by changes in terrain and uncertainty, after so many years, about the exact site of burial. Despite these difficulties four people - Eamon Molloy, John McClory, Brian McKinney and Jean McConville, were located and returned to their families for Christian burial. Republican efforts continue in the search for the five remaining individuals -Seamus Wright, Kevin McKee, Columba McVeigh, Brendan McGraw and Danny McIlhone.

The Sinn Féin President made a series of suggestions, based on best international experience, at least five years ago to the Irish government to assist the search. These included the use of archeologists, forensic experts, scanning equipment and dogs. He also suggested the adoption of 'a recreation of the scene' approach.

After a lengthy period which saw intense lobbying, the Irish government eventually employed a forensic expert with experience in the area. He started work over a year ago.

The IRA met the forensic expert up to seven times over a 10-month period. There were detailed discussions and specific information was provided on the outstanding cases. Each site was visited by the forensic expert and by IRA personnel including individuals with primary knowledge.

Some suggestions were made by the IRA, while it agreed to others made by the expert. These included use of aerial photographs , from military or commercial sources of the sites at the time of the executions; ordinance survey maps of the period; forestry records; x-ray equipment; archeological experts; records, maps, photos and reports of work already carried out on each site, and the appointment of a project manager with the power to make things happen.

The forensic expert's report, outlining the best way to proceed towards successful retrievals, was submitted to the Irish Government five months ago but has yet to be made public.

Since February Sinn Féin has repeatedly contacted the Taoiseach requesting access to the report and access for the families, who understandably wish to move as swiftly as possible towards resolution.

The sense of urgency is underpinned by the practical consideration that on site progress can only be sought during the dry weather of summer months.

In a briefing to the media this week, Gerry Adams said he was of the view that the remains of the five people still missing could be retrieved.

Five years ago Sinn Féin established a small group of people to liaise with the families, some of whom are themselves republicans, and contact the Irish government and the commission established to retrieve the remains.

"Sinn Féin approaches this as a human rights issue, republicans were involved in an injustice and we're doing our best to address that," said Adams.