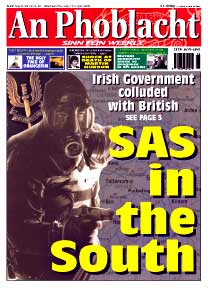 Details have emerged this week about the arrest and subsequent release of an undercover British army unit in County Louth 30 years ago. The confidential British documents, released under the 30-year rule, relating to the arrest of eight SAS members on 5 May 1976 throw further light on the activities of undercover British operatives South of the border during a period when civilians were murdered in circumstances which raised major questions about collusion.

The papers also reveal the depths to which the Irish Government of the time colluded with British operations and the abject nature of its relationship to the British Government.

The revelations come against the backdrop of the latest Barron report into collusion between state forces and unionist paramilitaries in attacks in the 26 Counties.

Former Supreme Court judge Henry Barron investigated collusion with unionist paramilitary attacks such as that on Kay's Tavern Dundalk, Silverbridge, Castleblaney, Dublin Airport and the Miami Showband massacre. His report said "there was a high probability of collusion between loyalists and security forces".

Documents obtained by Sinn Féin and made public this week relate to the year 1976. At this time four people were murdered in mysterious circumstances in the border area, including Seamus Ludlow and Peter Cleary in Louth. Nobody was charged but unionist paramilitaries and the British secret services were suspected.

The SAS men were arrested in three cars with submachine guns, handguns, a short-barrelled shotgun and a dagger. They were charged with possession of weapons with intent to endanger life. In Dundalk they were questioned about killings, including those of Séamus Ludlow and Peter Cleary.

What ensued was three weeks of frantic diplomatic and political activity. It is clear from the files that the British Government would not tolerate any suggestion of the SAS members going to prison for their illegal activities in the 26 Counties and it threatened dire consequences including the use of unionist paramilitaries if they were jailed.

There were phone calls to the Taoiseach Liam Cosgrave from the British Prime Minister and angry representations to Irish Ministers to "press home the full consequences of Irish Government actions".

Among consequences mentioned were 'strong and violent reaction by loyalist paramilitaries', and 'anti-Irish backlash in Britain'.

The British also attempted to suppress media investigations, in particular the "delicate matter" of the arrest of a Fijian national among the SAS team. The Fijian authorities were asked "to play this low-key (as they have on a previous occasion)". The same Fijian SAS man led a coup against the government of Fiji in the year 2000.

The British prepared position papers on its reaction to the possible jailing of the SAS team including one which proposed a trade embargo, a ban on remittances, a prohibition on Irish immigration to Britain, withdrawal of Irish security benefits to Irish citizens in Britain, ending of voting rights and a sustained media campaign about Irish 'failures' in relation to security matters.

The British also discussed the possibility of "covert persuasion" on the Director of Public Prosecutions (DPP) from Irish Government Ministers. They took legal advice on the possibility of SAS men absconding while on bail but ruled it out for fear of the consequences it would have for undercover operatives arrested during future incursion into the 26 County area.

The British also considered introducing an Act of Indemnity such as those used at the end of wars or occupation of colonies.

What is probably most revealing of all in the British state papers is the fact that Paddy Cooney, the then Minister for Justice in the 26 Counties, informed the British that had the issue of the SAS men's arrest been referred to him before it had gone to the DPP, the SAS would have been quietly returned across the border. Cooney assured them that there would be no repeat. He said that this quiescent attitude of the Irish Government in the face of British incursions would probably lead to demonstrations but that the Gardaí 'would take pleasure in dealing with these adequately'.

The eight SAS men were eventually let off with a fine.

Speaking on Wednesday, the Sinn Féin TD for Louth Arthur Morgan said the revelations raised fundamental questions. "At this time at least four people were killed in mysterious circumstances in the border area, including Seamus Ludlow and Peter Cleary here in County Louth. Nobody was ever charged with these killings although loyalists or elements of the British state were always suspected.

"The confidential documents also reveal an alarming attitude displayed by the Irish government of the day and in particular the Justice Minister of the time Paddy Cooney. They were all too willing to play along in a cover-up being orchestrated by Downing Street rather than standing up and demanding answers on behalf of the Irish people. His attitude and that of the government he was part of is disgraceful. He even goes as far as to say that if he had heard of the incident first he would have ensured the safe return of the SAS gang with no questions asked.

"Paddy Cooney's conduct and that of the Fine Gael Administration requires close scrutiny and I believe that these revelations will be the tip of the iceberg regarding the shameful relationship he and the administration carried on with the British authorities behind the backs of the Irish people."

"The Report again highlights the fact that the Mitchell farm at Glennane, County Armagh, was the UVF base for attacks, that members of the RUC and UDR were members of the gang and that British crown forces at higher level were well aware of what was going on there." The Glennane farm, owned by RUC reservist James Mitchell, was used by loyalists and their controllers in the crown forces as a base for a range of attacks across the Border and in the North itself", he said.

Margaret Urwin of Justice for the Forgotten emphasised the importance of addressing collusion as it affected people in the 26 counties and accused Barron of "letting the British off the hook". While the report goes as far as to address the attitudes of the British forces towards loyalist attacks which contributed to scenario where "loyalist subversives believed that they could attack with impunity", he stopped short of accusing senior officers.

In 1975 three members of the Miama Showband were shot dead by a UVF gang who tried to put a bomb on the minibus in which they were travelling. Another band member, Steven Travers who survived the attack said he believed the crown forces colluded with the UVF in the ambush. Margaret English whose father Hugh Waters was killed in the Kay's Tavern bombing expressed dissatisfaction at the way the families had been treated by the authorities over the years and said the bombers had been treated better.

Former Minister for Justice in the 26 Counties, Paddy Cooney