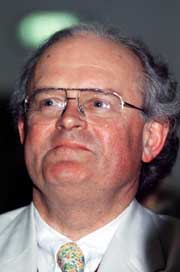 Once again the PDs are in the news, and for all the wrong reasons, as Stephen Collins might say. But it has been interesting to see the way in which the normal media feeding frenzy whenever politics descends to the level of raw, personal ambition has been leavened by a lot of sympathetic coverage.

Bruce Arnold, for example, in last weekend's Irish Independent felt required to openly declare his favouritism for the PDs! Actually, Bruce, we hadn't been in any doubt about it. For Bruce the PDs were the party who took the most unequivocal anti-republican stance, and since Bruce is a loyal son of Britain what more could be asked for? The public split between Mary Harney and Michael McDowell has horrified Bruce, just as it has intrigued the rest of us.

Of course, all journalism is partisan. But some is more partisan than others. A professional approach to the PD row would have been to assess the consequences dispassionately, but try and spin the story in a way best suited to the writer's own personal inclinations. But none of that in the Irish Independent. Bruce airily dismissed the idea that the PDs could in any way be damaged by the public row: surely it wasn't really a row at all, and after the famous lunch, all was sweetness and harmony anyway, and only the diehard anti-PDers (who it appears are pretty numerous) could continue to argue otherwise.

The extent to which the PDs are damaged is a matter of conjecture, but the image of a principled party bent on maintaining "the highest standards" in Irish political life - that's the mantra by which the PDs hope to swing votes - must be a bit tarnished, even in Bruce Arnold's rose-tinted view.

And, more to the point, a newspaper which pretends to be a newspaper, would look for a more professional approach to its journalism. It's a bit like Sherlock Holmes' famous dog that didn't bark in the middle of the night. That was what was curious.

And what is curious about the Irish Independent is that it increasingly sees its role as the leader of the charge against anything that might smack of republicanism, and the defender therefore of all those who oppose republicanism.

Bruce Arnold's feeble piece might not be a very effective example of the syndrome, but his rising to the defence of the PDs is entirely within the tradition of the Indo and its warped sense of free speech. For the paper of Tony O'Reilly, the paper of 1913's William Martin Murphy, freedom of speech is the freedom to write any anti-republican bile you like, to distort the facts as they suit you whenever you like and, of course, never ever to criticise 'Sir' Anthony O'Reilly.

Another interesting thing about the media coverage of the whole PD story was the complete absence of any attempt to explain the differences between Harney and McDowell in political terms. There was plenty of information given about the deepness of the split, of the incidents which reflected that reality, but no explanation as to why the two top people were at each other's throats.

It was all just personal.

To some extent this is true. The PDs are, at the end of the day, not that ideological after all: they came into being on the backs of opposition to any manifestation of nationalism, and of wanting to follow in the footsteps of their inspirer - Margaret Thatcher, and that's all they're about.

It's true that McDowell has attempted to cover his stance with a weird claim of being really a nationalist at heart, but the record of his public and - more importantly - his private role on the peace process doesn't back that up.

But perhaps there might be seeds of division within that?

Well, don't expect the Irish media to go there. It's dangerous territory. Speculating about real stances on the national question runs the danger that the journalist might inadvertently reveal views that are not in tune with those of the people who own the papers, and God forbid that would happen.

Journalists have been so corrupted by the system that most of them are not even aware of real issues of political debate, of the nuances of view that make up the reality of politics when politics is about reshaping society.

That's not to say that a reshaping is not still underway. The project of belittling the national struggle is central to what established journalism is about in modern Ireland, and the invasion of British-owned titles has only exacerbated that.

The point is that we don't have a free press, or an informed press. We have a press that is owned by the British and by pro-British elements, and in which journalists are cowed to conform and toe the line.

And finally to help Ruth Dudley Edwards answer the question she posed in the British Daily Mail as to why Ken Loach hates his own country, perhaps it's for the same reasons that she hates hers - but in reverse. Loach takes an anti-imperialist stance, Dudley Edwards takes a pro-imperialilst position. Easy really.