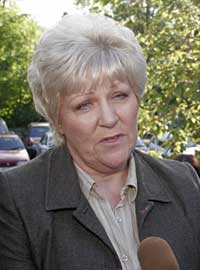 Unionist-controlled Ballymena district council continues to fund community divisions while rejecting the opportunity to promote reconciliation. Last month unionist councillors literally drummed out attempts to introduce a motion in the council proposing the establishment of a Special Committee to tackle sectarianism in Ballymena.

Unionist councillors banged their fists on their tables disrupting any attempt to put the motion against sectarianism before the council to be debated while outside nationalist councillors were subjected to further intimidation by a unionist mob.

The eagerness of the council to oppose progressive change appears to be matched by their eagerness to hold onto their discredited past. The council is proposing to continue to fund Twelfth bonfires despite the anti-Catholic and anti-nationalist ethos of this annual expression of Orange supremacy. Local Sinn Féin councillor Monica Digney has described the council's financial support of Orange bonfires as an "affront to equality".

Digney has called on Ballymena council to stop funding unionist bonfires that ritually burn Catholic effigies as well as images of nationalist and republican political representatives. This annual display of sectarian hatred will take place in Ballymena against the backdrop of a brutal sectarian killing of a 15-year-old Catholic schoolboy and a recent death threat against a Sinn Féin councillor.

"It is untenable for the council to continue offering financial support for bonfires that clearly promote hatred and sectarianism," said Digney.

"Let's face facts, burning effigies of the Pope as well as posters of nationalist representatives like myself is going to do nothing but instil hatred and ill feeling towards Catholics and nationalists in the Ballymena area."

"Sinn Féin is opposed to financial aid for bonfires on the grounds that it rewards sectarianism as well as being detrimental to the environment. It's an exercise in disrespect, destruction and dispersal of toxic pollution."

"For the council to fund this is an affront to the equality and mutual respect that Catholics and nationalist ratepayers in Ballymena are entitled to," said Digney.

At the same time a survey carried out as part of the council's legal requirement to provide an equality impact assessment of its practices showed that a significant number of the workforce viewed the flying of the Union Flag on the council building as a way of displaying unionist domination in Ballymena.

"Common sense would tell you that the Council's present policy on flags and emblems is detrimental to community relations. The most sensible way forward is to make the council a neutral venue," said Digney.

A £30 million public investment into a company recently identified as the worst employer in the North in terms of equality has also done little to build the confidence of nationalists in the operation of unionist domination in Ballymena. Equally the DUP's response to the Equality Commission's scrutiny of anti Catholic discrimination in the workforce has done nothing to enhance nationalist confidence.

The Equality Commission recently revealed that in a council area which is over 20% Catholic, the Ballymena coach building company, Wrightbus, only employs 2% Catholics. The DUP responded by immediately calling for the Commission to be disbanded. DUP MP Gregory Campbell accused the Equality Commission of failing to deliver fair employment for Protestants and said the body must be scrapped.

"The DUP has a track record of taking a totally blinkered approach to equality in the workforce," said Sinn Féin's spokesperson on Equality, Caitriona Ruane.

"Perhaps the biggest difficulty for unionists like Gregory Campbell is in accepting that Catholics faced discrimination for generations. The call for the Equality Commission to be scrapped is unrealistic," said Ruane.

Wrightbus currently employs 662 Protestants and only 33 Catholics. According to the Equality Commission in 2004 there were only two Catholics out of 97 successful applicants for jobs.

"The record of Wrightbus on equal employment is a disgrace. For too long it has been a cold house for Catholics and this is made all the more obvious by the number of union flags flying at the factory entrance," said Sinn Fein's Philip McGuigan.

The North Antrim MLA dismissed company claims that the lack of fair employment was due to a skills shortage amongst Catholics. McGuigan called on the company to tackle the shameful under representation of Catholics within its workforce rather than "defend the indefensible".

"I think it's time the British government looked seriously at employment practices at Wrightbus considering the amount of investment that is coming from the public purse," said McGuigan.

Meanwhile in another part of Ian Paisley's constituency, the DUP have been criticised for refusing to elect a woman or nationalist to any of the top posts in Ballymoney council.

Loughgiel councillor Anita Cavlan accused the DUP of abusing their position as the largest party in Ballymoney by excluding the second largest party, Sinn Féin from office.

"The DUP have again missed the opportunity to show that they are capable of power sharing in Ballymoney. Nationalists represent a third of the population here but their representatives are continually kept out of the top positions by DUP bigotry," said Cavlan.

And exclusion isn't simply the DUP's policy within council, their decision to exclude Rasharkin councillor Daithi McKay from the village's Community Centre Committee has also angered many nationalist residents.

Despite the fact that McKay is the only councillor that actually lives within the village boundaries, the DUP controlled Ballymoney council elected councillors from different villages to sit on the committee.

"The DUP have ensured the residents of Rasharkin are not represented on their own community committee, that's not democracy, that's dictatorship," said McKay.