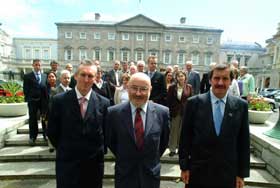 It is not often that moments of real emotion occur in Leinster House. But last Thursday was such an occasion when we welcomed the families of Irish Republicans who died on hunger strike.

It was 25 years on since the election of Kieran Doherty and Paddy Agnew as prisoner TDs for Cavan-Monaghan and for Louth. Kieran died within weeks of his election and Paddy remained a prisoner in the H-Blocks. Their families, friends and supporters were locked outside the gates of Leinster House as both a Fianna Fáil and a Fine Gael/Labour government failed to act while the prison tragedy unfolded and ten men died. On 22 June 2006 there was much symbolism in the occasion as relatives of the 1981 hunger strikers, as well as those of three hunger strikers from other eras, were greeted at the gates of Leinster House by the Sinn Féin TDs.

Several generations were represented among the relatives present. Kieran Doherty's brother Michael was there with his wife Betty and young son Kieran, named after his uncle. "At last a Kieran Doherty is taking his seat in Leinster House", remarked Caoimhghín Ó Caoláin. Joining families of the men of '81 were relatives of Tony Darcy of Galway and Seán McNeela of Mayo who died on hunger strike in de Valera's jails in 1940 and of Frank Stagg of Mayo who died in Wakefield Prison, England, in 1976. The women of Armagh Prison were represented by former prisoners Síle Darragh and Marie Gavigan

In the oldest and most historic part of Leinster House the Sinn Féin TDs made presentations to the families. Chairing the simple ceremony, Aengus Ó Snodaigh, Sinn Féin TD for Dublin South Central, spoke of the impact the 1981 hunger strike had on him as a young republican and on so many others. Former hunger striker Lawrence McKeown recalled his experiences. He described Kieran Doherty - 'Big Doc' - as a father figure for the younger prisoners like himself, even though Kieran was a young man who had spent most of his youth imprisoned by the British state because of his republican beliefs. Lawrence also paid tribute to the work of the National Hunger Strike Committee in marking the 25th anniversary, and to Seando Moore in particular.

Kieran Doherty's Director of Elections in Cavan-Monaghan in 1981 was Caoimhghín Ó Caoláin, now the leader of the Sinn Féin TDs. He said:

"It cannot be stressed strongly enough that the prisoners in the H-Blocks and Armagh had the support and good will of the great mass of the Irish people North and South of the border. There was a vast gulf between the people of Ireland and the political establishment in this State during the H-Block-Armagh crisis. With very few exceptions, Kieran and Paddy's fellow TDs stood idly by while the agony of the prisoners and their families went on from 1976 when criminalisation was first imposed until the end of the Hunger Strike in 1981. Yet the Hunger Strikers will be long remembered by the Irish people and by freedom-loving people all over the world when most of those who held public office in 1981 are long forgotten.

"The Dáil record has very few references to the death of Kieran Doherty, TD for Cavan/Monaghan, at the hands of a callous British Prime Minister. There was no special debate. No motion of support for the prisoners' demands. No unity in the face of a British government that was wreaking havoc in our country. There was a shameful silence within these walls.

"Two of those who died on Hunger Strike in 1981 - Kieran and Bobby - were elected representatives of the Irish people. They followed in the footsteps of that other elected representative who died on Hunger Strike, Terence McSwiney TD, Mayor of Cork. In all 22 Republicans trod the lonely path of Hunger Strike to death from Thomas Ashe in 1917 to Mickey Devine in 1981. We remember them all equally and our tribute here today encompasses those who died in every phase of our nation's struggle for freedom."