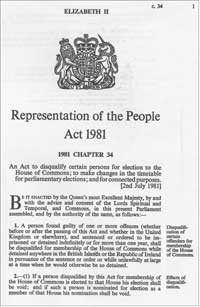 Following the election to the Westminster parliament of IRA Hunger Striker Bobby Sands, the British Government under Margret Thatcher were detrmined to change electoral registration so that the feat could not be repeated. In June 1981 it pushed ahead with an amendment to the Representation of the People Act.

The amendment was specifically designed to bar republican prisoners from standing in further elections. With Bobby Sands' death on hunger strike the Fermanagh South/Tyrone constituency was now due for another by-election. The amendment passed by 348 to 137 in Westminster after Labour allowed its MPs a free vote. A quote from English newspaper, The Guardian, summed up the situation:

"It would be a mistake to assume that because of its grandiose name this measure (The Representation of the People Bill) is about representing anybody. Quite the contrary it has to do with non-representation of a certain class of people who are notoriously reluctant citizens of the United Kingdom - the IRA and its supporters."

On 25 June the bill was extended to cover prisoners in jails in the 26 Counties.

On 19 June British Direct Ruler Humphrey Atkins had astonished people when he announced he intended to start a new round of talks with the political parties. A sign of how much pressure the SDLP was under came in Seamus Mallon's prompt dismissal of the notion accusing Atkins of great insensitivity towards "a community which is being torn apart emotionally by the continuing tragedy of the hunger strikes".

The SDLP had still to call whether or not they would contest the Fermanagh/South Tyrone by-election. There was speculation that the republican prisoners would stand a substitute candidate. Fermanagh man Owen Carron, was the name being mooted. He was a republican of long standing and had been Bobby Sands' election agent. The unionist candidate, Harry West, was expressing hope that the RUC would interview Carron about "his long standing association with the IRA over many years" before any by-election was held.

In response to requests, from amongst others, Charles Haughey and The Irish Commission for Jutice and Peace, Atkins ruled out any concessions to the Hunger Strikers. Speaking on 30 June he said that there would be no concessions towards the granting of the prisoners Five Demands or political status.

Making vague noises about useful activity as opposed to work and ordinary clothes as a substitute for prison clothes and saying the hunger strike must end before anything could happen the statement was welcomed by the SDLP and the Irish and British media. The ICJP went furthest of all stating that Atkins' statement together with "clarifications" received over a number of days had encouraged them in their efforts to reach a solution.

Rejecting the statement the H-Block prisoners said: "The purpose of this statement is to buy the silence of various genuinely concerned groups- such as The Irish Commission for Justice and Peace who have been lobbying the British for our five demands - by vaguely guaranteeing unspecified further developments of the prison regime at some unspecified time in the future.

"The Atkins statement cannot be taken as a sincere attempt - based on the need to find a solution and avoid any further tragedy - to end the hunger strike, for no one with even the most basic grasp of the situation can expect us to submit to such an ambiguous and distorted statement.

" To do so would be an insult to ourselves, our comrades who died, our steadfast relatives and supporters and all those bodies who want to see a just settlement to this issue.

"It is becoming blatantly obvious that the British are intent on creating a worsening situation if this statement is anything to go by. Even as one of our comrades lingers on death's doorstep we call on the British to climb down from their high horse and act in a responsible manner and initiate meaningful dialogue with the prisoners to find a solution.

"Lastly we wish to state in unequivocal terms that contrary to what the British say, the Five Demands which we are committed to obtaining, would go far to give back all prisoners dignity as human beings of which we are robbed at the present and we would welcome their introduction for all prisoners."

Taoiseach Charles Haughey said of the ongoing impasse: "I have explored every means of finding a solution on humanitarian grounds", before declaring "I intend to take a fresh initiative to find a solution, which will bring the present tragic and dangerous situation to an end." In the end this new initiative amounted to a statement criticising the intransigence of the British but not a lot else. Sinn Féin described it as four months and four deaths too late.