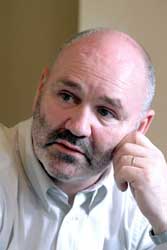 An upsurge in racist attacks throughout the North, last weekend, highlighted an emerging pattern where loyalist gangs, steeped in sectarian bigotry, and used to targeting nationalists are now directing their hate towards ethnic minority communities as well.

The latest attacks come as figures emerge of a sustained increase of racially motivated crimes with 1,077 attacks last year. Just hours before the North was branded as "the race hate capital of Europe" and the launch of a report documenting racist violence in the Six Counties, loyalist thugs attacked the homes of Lithuanians living in Dunmurry on Sunday 25 June.

The same gang was thought to be responsible for damaging two houses belonging to Lithuanians in the Seymour Hill Estate on the outskirts of Belfast.

A series of racist incidents directed against a Polish family in Carrickfergus culminated in the family being forced from their home on Sunday. Fire swept through the back of the house at Burleigh Drive in the loyalist Woodburn area after an oil tank at the rear was set alight.

In a further attack on Sunday a Lithuanian man was injured at a house in Riverside South, Castledawson, in County Derry after his home was set on fire by loyalists.

Meanwhile a Latvian man was attacked by two men using bats and sticks on the Moira Road in Lisburn on Saturday. The man suffered serious eye and head injuries.

Saturday also witnessed a vicious assault on three women of East European descent as they slept in their home in Cloughey, County Down. Five masked men, armed with baseball bats, forced their way into the house in the Cloughey Road area on Saturday night, smashing furniture downstairs before going upstairs and attacking the women.

Sinn Féin's South Belfast MLA Alex Maskey described the rise in racist incidents as "an indictment of the political parties and both local government and British direct rule". "We clearly need to look at the patterns that are emerging in relation to where these attacks are taking place and who is responsible. It is only through honest analysis that we will make progress", he said.

Launching a report entitled "The next Stephen Lawrence?" about racist violence and criminal justice in the North, Patrick Yu of the Northern Ireland Council for Ethnic Minorities said the group had commissioned the study after growing reports of racist violence. Doreen Lawrence who campaigned for justice following the racist murder of her son, Stephen, in England, as well as human rights lawyer Imran Khan attended the launch.